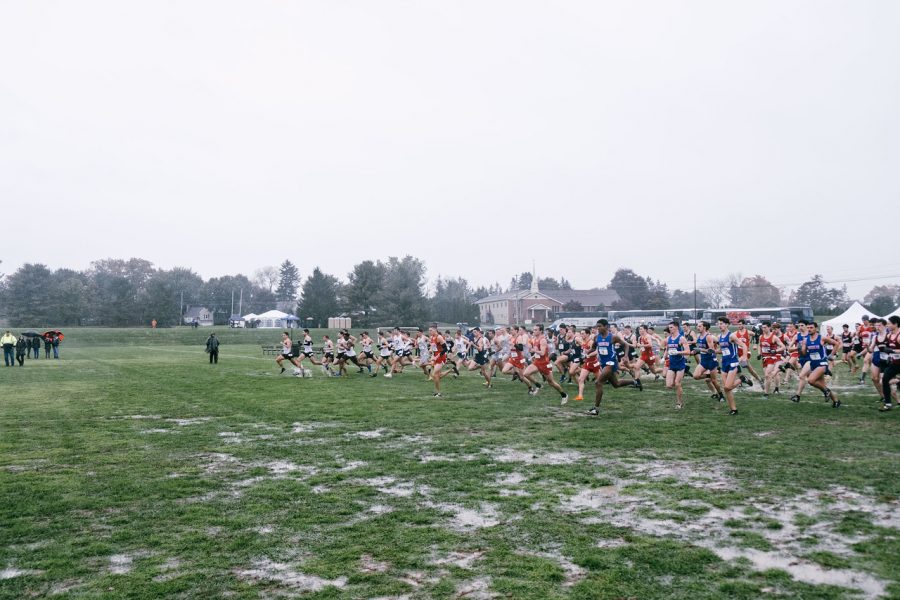 Faced with difficult rainy conditions, the Bison women’s cross country team earned their fourth straight Patriot League Championship title on Oct. 27, earning a total of 33 points, 40 points ahead of second-place Lehigh University. Colleen Buckley ’19 won the women’s race, pacing the Bison to the a team victory. On the men’s side, the team finished third overall, their highest finish since earning runner-up in 2014.

Running through massive puddles and cold wind, Buckley strided to her first individual 6k title with a time of 21:41.

“The conditions were not ideal, but our team prides itself on being really tough about handling adverse weather,” Buckley said. “For me personally, I think the weather actually made the race more fun It was a true cross country race, where people were racing with heart, not racing the clock.”

Having previously placed fourth and third during her sophomore and junior year, respectively, this proved to be Buckley’s year for victory.

When asked about her reaction to this accomplishment, Buckley spoke of the bittersweet thoughts that occurred.

“Honestly, it was a little surreal. With this win came a twinge of sadness, for this race was such a special one. It was a little sad realizing that it was coming to an end,” Buckley said.

On the men’s side, three members of the Orange and Blue collected Second Team All-Patriot League honors, including Brian Dengler ’20, Jacob Stupak ’20, and Chad Sussman ’19. Dengler finished 12th place overall in the 8k race with a time of 26:24, followed by Stupak and Sussman in 13th and 14th place, respectively.

The Bison will be back in action when they compete in the Mid-Atlantic Regionals held at Penn State on Nov. 9.