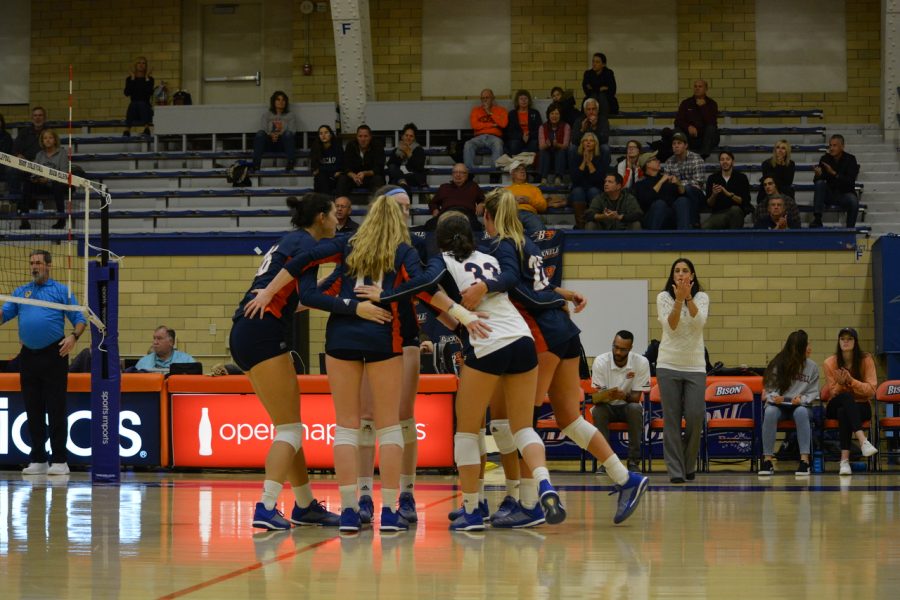 In the match against the Raiders, Brooke Stark ’20 led the teams with 20 digs. Also contributing double-digit digs were Sophie Bullard ’20 and Delanie Lewis ’21 with 14, and Alexa Bonanno ’21 with 12. Jennie Burke ’22 added nine digs to the match.

In earning her fourth double-double of the season, Bullard led the team with 12 kills, while Burke added 11 kills to her total. Both Bridgette Holland ’20 and Mimi Richards ’20 added nine and eight kills, respectively. Bonanno finished with a team-high of 34 assists.

Against the Crusaders, the Bison won the third set, overcoming the opposition 25-11. Holland contributed three of the first four points to put the Orange and Blue ahead during a 15-1 run that propelled them to a win in the set. During the run, Bullard, Bonanno and Emma Buchanan ’22 had one kill a piece.

“This week we are focusing on the idea of class identity and what each member of our respective classes can bring to every match, not only this season but in the seasons to come,” Selby Schnobrich ’20 said. “We are looking forward to making words such as commitment, effort, and selflessness strong elements of our team culture, allowing them to translate in our play and character both on and off the court.”

With their most recent losses, the team brought their overall record to 6-17 while dropping to 1-11 in the Patriot League. The Bison play Lehigh on Nov. 2 and Lafayette on Nov. 3.