Take Back the Night 2018: Enough is enough 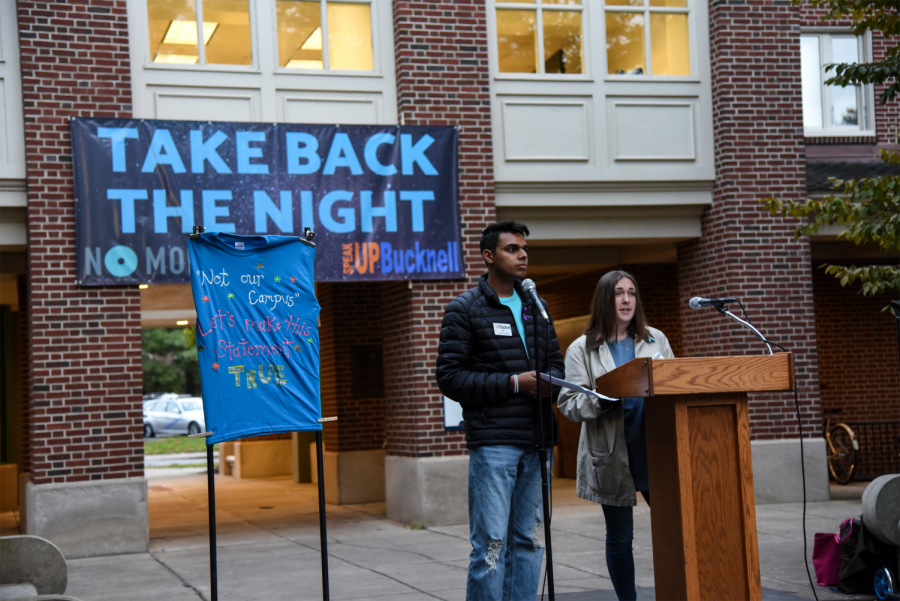 Hundreds of students, faculty, and members of the University community gathered at the Smith Quad on the evening of Oct. 25 for the Take Back the Night event, sponsored by SpeakUP. Participants heard personal stories from victim-survivors, declarations of support, and commitments to preventing sexual violence on campus. Speakers included both student and faculty leaders, such as student body president Chandler Houldin ’20 and University President John Bravman. Many speakers also made fervent calls to action and awareness, particularly in regard to the lack of intersectionality on campus. After hearing from speakers, individuals observed a moment of silence to reflect. This was followed by a march around campus. SpeakUP peers led the march with cheers, promoting a commitment to fighting back against issues of sexual violence.

Bravman was the first of the speakers to address the crowd. He spoke about how there is still a great deal of work to be done in combating issues of sexual violence. Specifically, Bravman called on the men to “be active bystanders,” as he contended that sexual assault and violence is “not uniquely a male problem, but [is] very heavily a male problem.” Bravman closed his speech with a charge to the University: “Let’s not give up; let’s remember sexual assault is at the pinnacle on the spectrum of abuse … We are not done; we are counting on you. I can’t do it, the police can’t do it, but we can do it as a community.”

Take Back the Night was one of the events hosted by SpeakUP for “No More Month,” which takes place in October. Each year, students, faculty, and members of the community come together in support of victim-survivors of sexual assault, as SpeakUP provides many opportunities for members of the University to show their solidarity through events such as The Clothesline Project and Take Back the Night.

The attendees heard from University students Brooke Schechter ’20 and Tierney Beauregard ’20, who read a poem that they wrote about their experiences. “I wanted to speak because for two years I felt smothered. I felt incomplete and I knew once I was able to tell my story a weight would be lifted off me. I told my story knowing there might be that one person who felt inspired enough to share their own story and the cycle would continue,” Schechter said.

Jacob Adeniran ’19 also spoke at the event. “The main reason why I think [Take Back the Night] is important is visibility. It’s important that Bucknell as a whole sees this, [and] that survivors know there’s support,” Adeniran said.

“I’m our campus’ only female chaplain, and it’s really important for me to show up in these spaces to make sure students know we are here for them,” Rabbi Chana Leslie Glazer said. “In the office of chaplains, we are here for anybody who needs a confidential, caring, and supportive place to go. Especially as a woman and as a survivor, I want to make sure students know we are there for them.”

Not all who spoke praised the University. Many individuals, both those who spoke and those who attended, feel as though there is a failing on the part of the University and its community, especially in regards to the lack of intersectionality when addressing sexual violence. Jordan Ferrari ’20, a SpeakUp peer, spoke to white sorority women, urging them to recognize their power and use it to take an intersectional approach in addressing sexual violence. “White feminists, your time is up here. You have an entire WMST and AFST department at your fingertips—educate yourselves. Sorority women, you have the power to take this campus overnight. And if that makes frat men scared then maybe in that moment of fear, they’ll feel what it’s like to be a woman on this campus for just a second,” Ferrari said.

Maxine Charles ’19, who has attended each Take Back the Night event during her time at the University, reaffirmed Ferrari’s frustrations. “I think there’s such a lack of intersectionality. There’s not a space for people of color, and it’s really hard always going to white space. It is always the time and place for this conversation,” Charles said.

Ferrari also expressed her frustration both with Bravman and the University community. “Your president thanks you for coming to an event and doing the bare minimum. He protects fraternities when their system oppresses everyone. When has Bravman ever thanked the trans community or the black community or the LGBTQ community for their constant emotional and psychological burden of having to carry this campus’ social justice movement?” Ferrari said.