‘No More Month’: SpeakUP and others work to change the culture 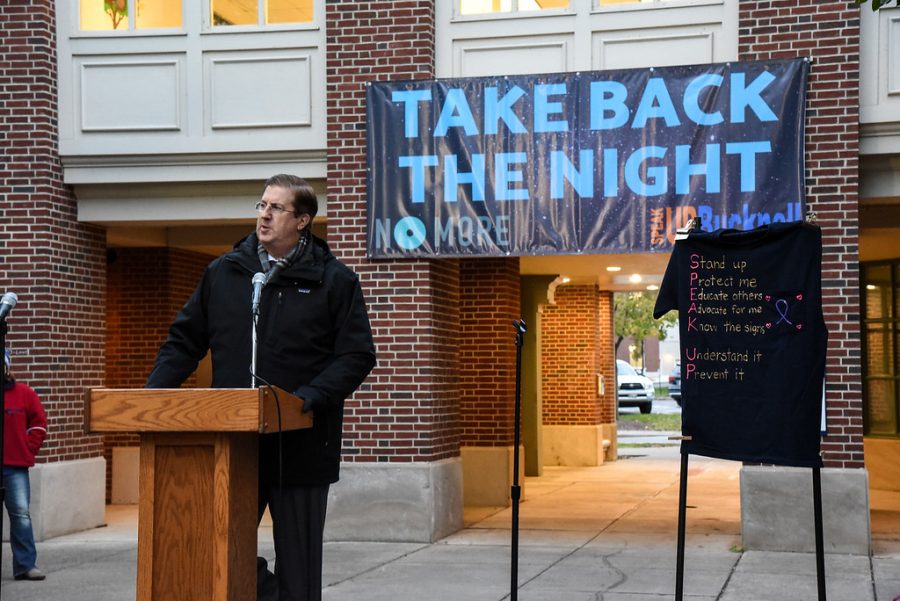 Take Back the Night

SpeakUP is the University’s peer education group, comprised of student volunteers led by Rachel Stewart, the Interpersonal Violence Prevention Coordinator. As a group, the peers work toward implementing and emphasizing the positive bystander model, which is the belief that each person in a community has a hand in shifting the culture and playing a role to help end sexual violence.

Throughout the academic year, SpeakUP works to involve members of the University community by spreading awareness and sharing stories. Their annual Take Back the Night event is a moving presentation that takes place outdoors and serves as a time for survivors to gain their voice back, speak out against sexual assault, and share their stories. It also provides a chance for University students to listen to their peers and community and stand in solidarity together. It is a night for everyone to be reminded of just how prominent the issue of sexual violence is, and the utterly detrimental effect it has on our community and our culture at large. Take Back the Night gives SpeakUP an opportunity to step outside of their workshops, support one another, and reflect upon how we all individually can help shift the culture to one of kindness, respect, and healthy relationships.

“We had a number of different speakers who highlighted the intersections of sexual violence and other marginalized identities, and the need to remember that there is no one ‘typical’ narrative of a sexual assault, on this campus or in the world,” Stewart said.

As our social and political climate shifts and evolves throughout the years, so does the narrative surrounding issues like sexual assault and rape.

“I think that really speaks to the ways that folks are advancing the conversations around sexual violence and becoming more nuanced over time. When Take Back the Night was first started in 1975, it was focused on ‘taking back’ women’s ability to walk alone at night, so it’s nice to see that the conversation has evolved and become more inclusive,” Stewart said.

Many students resonated with the speakers at the event. “As a student from a different country, I felt like I identified with one particular story of a woman who felt isolated on campus because of the lack of diversity. She addressed a struggle that many minority students have to deal with everyday on campus,” Mau Ramirez ’20, an attendee of the event, said.

SpeakUP student peers serve as “forces of good” on campus, from educating first-years, to participating in campaigns, acting as confidants to those who need an ally, and promoting events like Take Back the Night.

One SpeakUp Peer, Emma Mustion ’20, shared her thoughts on the role of SpeakUP on campus. “As much as SpeakUp is trying to spark change, we can’t do it without the support of the rest of the Bucknell community. While this means participating in the Ally program and attending our events, it also means holding yourself and your peers responsible for the way you think, speak, and act about these issues,” Mustion said.

The Clothesline Project is one of many campaigns and projects that SpeakUP promotes throughout the year. Since 2012, the University has taken part in the Clothesline Project, a campaign in which survivors or allies of sexual assault decorate t-shirts with a word or image to represent their experiences and sentiments.

“It allows for all individuals on campus to get involved. I think the clothesline project is one of the best events SpeakUp does, as it helps to foster and promote a supportive and caring community at Bucknell,” SpeakUP Peer Lisa Bernstein ’19 said.

The t-shirts were crafted in late September, and were later hung in public spaces, such as the ELC mall and Bertrand Library, throughout the month of October. These displays allow the University community to pass by the shirts every day, view these powerful messages, and be reminded of the toxic culture that surrounds all of us, and all of the people in our community that it affects.

The Stopp 5k is another signature annual event that the University partakes in as a part of its annual movement for sexual assault awareness. The event originated from the New Agenda Foundation, an organization with a mission to improve the lives of women and girls by bringing about systemic change, and takes place at college campuses across the nation.

“It was moving to see the Bucknell community come together and take literal steps towards a healthier culture, which is so sorely needed,” Meg Westrum ’19 said.

The 5k, which was co-sponsored by SpeakUP, had a great turnout this year, as it has year after year, with a healthy presence from Greek organizations and other University clubs.

As the #MeToo movement has brought these all-too-common cases out of the shadows and into the light of day in the media and popular culture, it is more important than ever to recognize that these same acts occur right here on our very own campus. As an aware and informed community, we have the power to aid in change.

Change must occur even on the most fundamental level, starting with taking an introspective look at ourselves. “As a coordinator for SpeakUP, my goal has been to try and diversify the identities and perspectives that SpeakUP represents. Our events this year, while providing me with hope, have shown me that we still have a long way to go, especially in terms of what we define as ‘ally-ship,’” Sid Iyer Sequeira ’21, SpeakUP Outreach Coordinator, said. “Ally-ship is not a badge of accomplishment, neither is it isolated to the attendance of a singular event; it’s about being constantly vigilant and finding ways to listen to those who have had their voice taken. It requires us to step outside of our comfort zones. We are all guilty of feeling comfortable in what we know, including myself, but we need to acknowledge this and work on ways to change that. The truth of the matter is, students of color, along with international students, don’t feel like they have spaces to have their voices be heard on this campus, even with organizations like SpeakUP, which consists of a specific demographic. SpeakUP’s collective goal is to enact true ally-ship this year,” Iyer Sequeira said.