Women’s basketball wins back and forth battle with Holy Cross 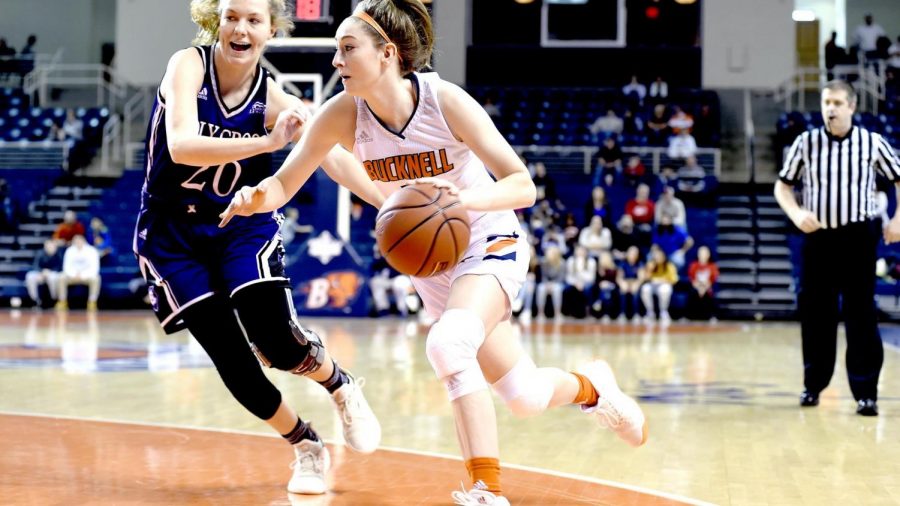 After a back and forth battle with 11 different lead changes, the Bison women’s basketball team came out victorious against the Holy Cross Crusaders, 75-71, on Jan. 26. Head coach Aaron Roussell, who is in his 15th season, also celebrated his 300th career win. With this victory at Sojka Pavilion, along with a 77-43 road blowout at Navy on Jan. 30, the Bison improved to 16-4 overall and 7-1 in the Patriot League. The two wins continue the team’s seven-game winning streak.

In the Holy Cross contest, Ally Johnson ’21 was a key contributor off the bench for the Bison, sinking all four of her field goal attempts and finishing the game with 11 points. Also finishing in double digits were Kaitlyn Slagus ’19 with 16 points, Ellie Mack ’20 with 15 points, and Kate Walker ’19 with 10 points. Mack and Walker also led the team with seven rebounds apiece. Walker finished up her well-rounded game with five assists.

“Saturday [against Holy Cross] was a big win for us! We weren’t necessarily playing our best, but we found a way to win. Coach Roussell always says how good teams just find a way. There are no excuses,” Walker said.

With only 2:48 minutes left in the game against Holy Cross, Mack lit up a 3-pointer to cut the Bison’s deficit to one point. She then assisted a layup to Kyi English ’19, extending their lead to 72-69 with under two minutes to play. In the fourth quarter alone, Mack scored seven points.

After shooting only two for 15 from behind the arc in the first half, the Orange and Blue finished strong going 6-of-10 in the second half.

Autumn Ceppi ’21 and Mack traded off to defend the leading scorer for the Crusaders, holding her to 5-of-16 shooting.

With minutes winding down in the first half, the Bison regained their confidence with some key shots by Rachel Dumiak ’19 and English. Dumiak hit a pull-up jumper to tie the game at 28-28. A few moments later English sunk a 3-pointer to make it a one-possession deficit with just 12 seconds left in the half, 36-33.

Johnson took over the game late in the third quarter, scoring eight straight points that included two three-pointers and a layup with 2:35 minutes left in the quarter.

“We moved the ball well in our offense, even when we weren’t making shots. We still have some work on the defensive end and rebounding-wise, but we played hard and executed toward the end of a close game which shows our team’s growth since the beginning of the year,” Johnson said.

The Bison led 57-53 going into the fourth quarter, in which they put on a strong defensive performance to secure the win. With 1:08 minutes left to play, the Crusaders were down 72-71, but the Bison went just 1-of-2 from the foul line on three continuous possessions. On the other end of the court, the Bison held the Crusaders to a missed three-pointer, turnover, and another missed three-pointer following the Bison’s offensive attacks.

At Navy, Mack paced the Orange and Blue with 17 points, while Slagus tacked on 13 points and six rebounds. The Bison never trailed in the contest and dominated the Midshipmen in bench points, 23-2, which proved to be a difference maker in the victory. The women will next take on Boston University on Feb. 2 at 2 p.m.