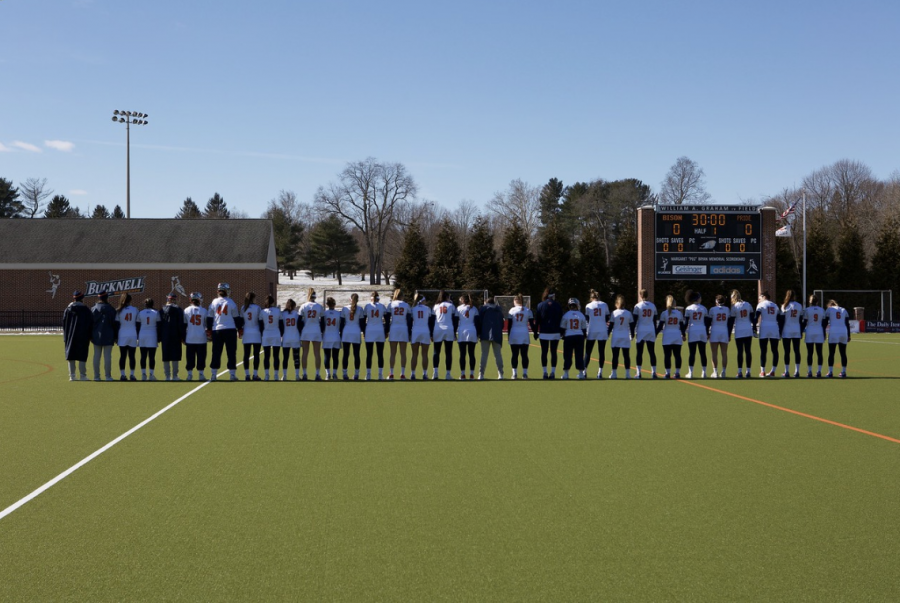 On Feb. 16 the women’s lacrosse team competed in their home opener against Hofstra.

The Bison women’s lacrosse team was defeated by the Hofstra Pride 13-4 during the team’s home opener on Feb. 16.

The Pride started off strong, scoring two goals within the first six minutes of play. A minute later, Bison midfielder Kate Fiore ’20 was set up by Sarah Dohler ’20 to get the Orange and Blue on the board. It was Fiore’s first goal of the 2019 season.

The Pride did not back down, as they consistently fired shots at Bison goalie Jamie DeWitt ’19. The Pride tallied four more goals to bring their advantage to 6-1. With 30 seconds left to play in the first half, Audrey Walsh ’19 answered with a tally assisted by Eve Calabria ’21, her 45th career goal. Walsh, who leads the team in points, went on to assist a goal by Kali Peeples ’21 late in the second half.

Amy Roche ’22 scored for the Bison during a one-man advantage play. Roche’s goal was assisted by Lillie Hunt ’20.

Despite the outcome, the Orange and Blue were able to apply consistent offensive pressure and tally 23 shots, compared to Hofstra’s 30. They also nearly matched Hofstra’s ground ball pickups, 20-24.

Calabria, last season’s team leader in points, explained her faith in the team’s defense and belief in their potential to perform well.

“We are rock solid for the rest of the season; offensively, we are finally starting to click and, at the pace we are going, I think we are going to surprise some people,” Calabria said.

The Bison will next take the field on the road against University of Albany on Feb. 23.