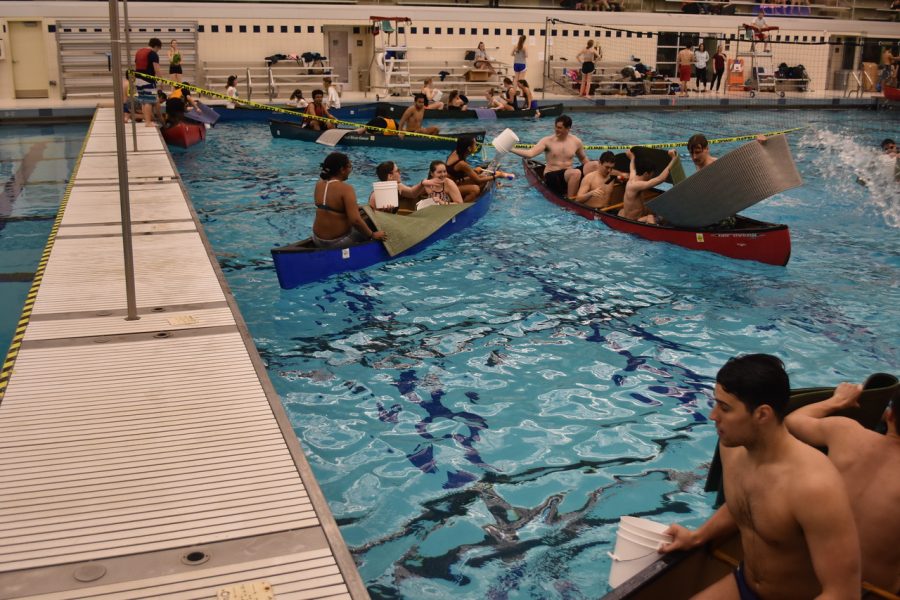 The objective of Canoe Battleship is to sink the opponents’ canoes before one’s own canoe becomes filled with water and sinks. Teams of three to five members used buckets and water guns to fill the other canoes with water while utilizing shields to block water from entering their own canoe. As water built up in the canoes, it became increasingly difficult to prevent the boat from tipping over while still attempting to throw water at other canoes.

“It was a really great team-building event and it was a cool way to interact and meet new people from all four different grades. Also, it was really cool to use the pool because before Canoe Battleship, I had never used the facility,” Jack Magarelli ’22 said.

At the start of the event, students divided into teams and were given team colors. Each team then entered the arena along with two other teams. Each round had three canoes of students from different teams, where they attempted to sink each other in the very small space. Teams played in different rounds until they were sunk twice, which would cause them to be eliminated from the competition.

“I had a lot of fun at Canoe Battleship! I was really surprised at how physically exhausting it was because I was constantly throwing a heavy bucket of water,” Marta Majewski ’22 said.

Many teams began forming alliances with one another and the two canoes would work together to sink the third canoe, ensuring that the two teams would advance to the next round. Several alliances were formed throughout the event and some were broken in later rounds when the teams would turn against each other.

“Everyone was super competitive but also so supportive. Overall, I thought it was a great event for the University and the community,” Majewski said.

Canoe Battleship continued on until there was only one canoe left floating. Throughout the night there were many victories in addition to the many canoes that were sunk. The event had one of the biggest turnouts in its history.

“Truthfully, I was super anxious to lifeguard during Canoe Battleship but once the event actually started, it was so much fun to watch. Watching the canoes try to sink each other made me want to participate in the event next year,” Emily Morris ’22 said.