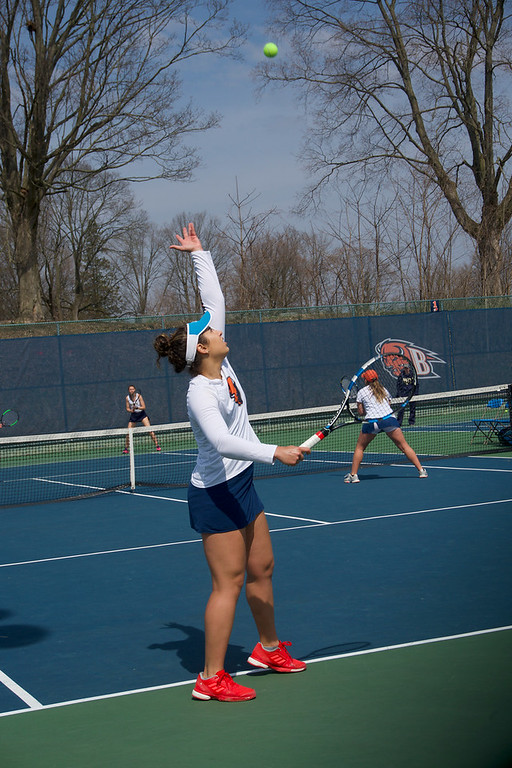 Sofia Ayuso ‘21serves the ball during a match against Navy on April 7.

The Bison women’s tennis team was defeated by Navy 6-1 on April 7. Despite the Orange and Blue putting up strong fights, they were only able to tally one win on an outstanding performance by Daniela Bellini ’22. Bellini defeated Navy’s All-Patriot League player, Ansofi Wreder 6-1, 6-0 in the first singles match. On the men’s side, the team suffered a 7-0 loss to Navy but went on to pick up a 6-1 win over Loyola on April 7 and a 4-1 victory over Lafayette on April 9.

“As long as I continued fighting, stayed resilient, and kept my energy up, I knew I would do well,” Bellini said. “During the match, I was focused on cheering for myself and my teammates, as well as keeping the good energy rolling up and down the courts.”

Along with Bellini, Cayla Koch ’21 also had a strong performance, but fell short, losing the tiebreaker set 1-0.

Before the match, the two Bison seniors, Mishi Papich and Danielle Gannon, were honored. Both Papich and Gannon have had successful careers with the Bison, and both have been named to the Patriot League Academic Honor Roll for three consecutive years.

The Bison women’s team beat Mount St. Mary’s 6-1 on April 10 at home in a mid-week non-League match and will face the Loyola Greyhounds on the road on April 13 in their next Patriot League match.

On the men’s side, the Orange and Blue fell 7-0 to the undefeated Navy Midshipmen in a Patriot League competition. The next day, the team rebounded with a 6-1 victory over Loyola.

Ethan Jacobs ’22 defeated his Loyola opponent in straight sets, 6-2, 6-2, bringing his overall record in conference play to 2-1. Other strong first-year performances came from Ryan Jurist ’22, winning 6-2, 6-4, and Cooper Bradshaw ’22, taking the victory in his match 6-1, 6-3. In doubles action, Marwan Abaza ’21 and Max McDonald ’19, and Jacobs and Bradshaw joined forces to collect wins.

The team competed in a match against Lafayette on April 9 and beat the Leopards 4-1 to collect their fourth win in their last five matches. Securing wins in the singles matches were Jacobs, Abaza, and Bradshaw. Abaza and McDonald teamed up for a 6-0 doubles victory and Jacobs and Bradshaw defeated their opponents 6-3.

The men’s team’s also beat Mount St. Mary’s 4-0 in a non-conference matchup on April 10, improving their overall record to 10-11 with a 3-2 record in Patriot League play. The Bison will be back in action when they compete against Colgate on April 12 at 4 p.m.