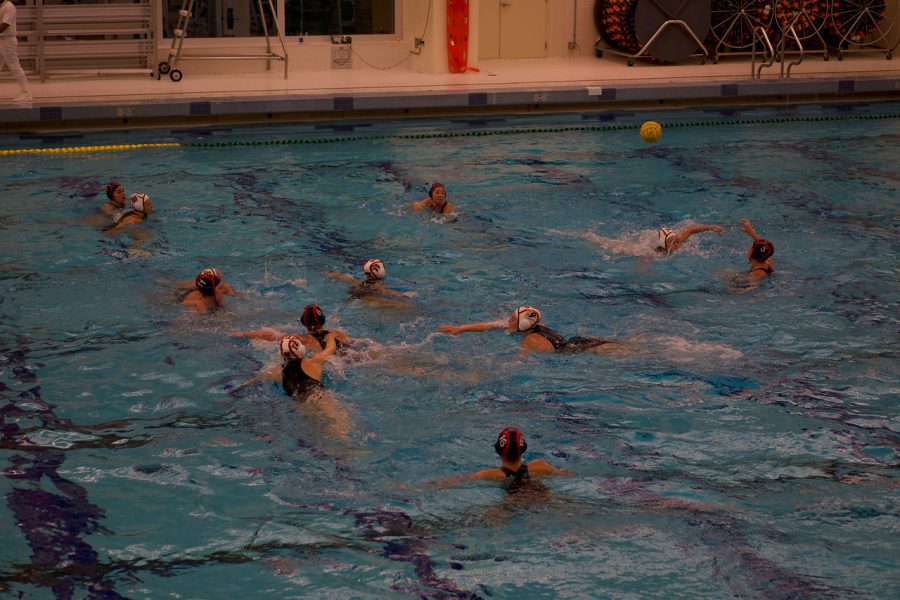 In its last three regular season games, the No. 18 Bison women’s water polo team (23-11) faced Saint Francis, Michigan, and Princeton on April 13-14 at Kinney Natatorium. The team beat Saint Francis for the second time this season with a final score of 12-5, but dropped games against No. 6 Michigan on Senior Night, 16-6, and to No. 15 Princeton, 10-5.

The Orange and Blue’s victory over the Saint Francis Red Flash (9-22) was propelled by hat tricks from both Kali Hyham ’21 and Emily Konishi ’19. The Bison were in command of the match from the start and led 5-1 at halftime. A third-period scoring outburst from the Bison put the match out of reach, and the team strode to a 12-5 victory.

After the victory against Saint Francis, the Bison were well aware that their final two games of the season were going to be against strong teams. On April 13, the Orange and Blue faced the Michigan Wolverines (21-8) on Senior Night. Before the game, the Bison recognized seniors Konishi, Sarah Mooney, Eliza Romeyn, Chelsea Scuderi, and Regina Younger for their contributions to the program.

Michigan entered the night with an impressive six wins against top 10 opponents this year. Their offense proved difficult to stop, and the Bison gave up the most goals they have given up all year: 16. Paige Furano ’22 scored three points on two goals and one assist, while Hyham added two goals. Michigan outscored the Orange and Blue in each period on their way to a commanding 16-6 win.

“Senior Night meant everything to me because it was one of the last times playing with this team and allowed me to reflect on all of our past moments together,” Konishi said. “I, and the rest of the senior class, are truly thankful for our experiences being a part of the Bucknell women’s water polo team and will miss representing this program.”

The following day, the Orange and Blue turned their attention to a very strong 19-8 Princeton Tigers team. The Bison look forward to every chance they get to compete against such high-level opponents, as these games serve as a metaphorical measuring stick for the program.

The Bison fell 10-5 to drop their regular season finale against the Tigers. After Princeton scored in the opening minute of the game, Hyham responded with a gritty goal of her own at the 2:20 mark. Nina Benson ’20 scored a minute later to give her team its first lead, but it was short-lived, as Princeton scored 20 seconds later. Leading 3-2 late in the second half, the Orange and Blue allowed three goals to end the half down 5-3. This Princeton scoring run proved to be a turning point, as the Tigers then outscored the Bison 5-2 to secure the 10-5 victory.

The Orange and Blue will play next at the Eastern Championships on April 26-28 at Brown University.

“Going forward, we want to finish this season strong and place in the top three of the CWPA Championships,” Konishi said.