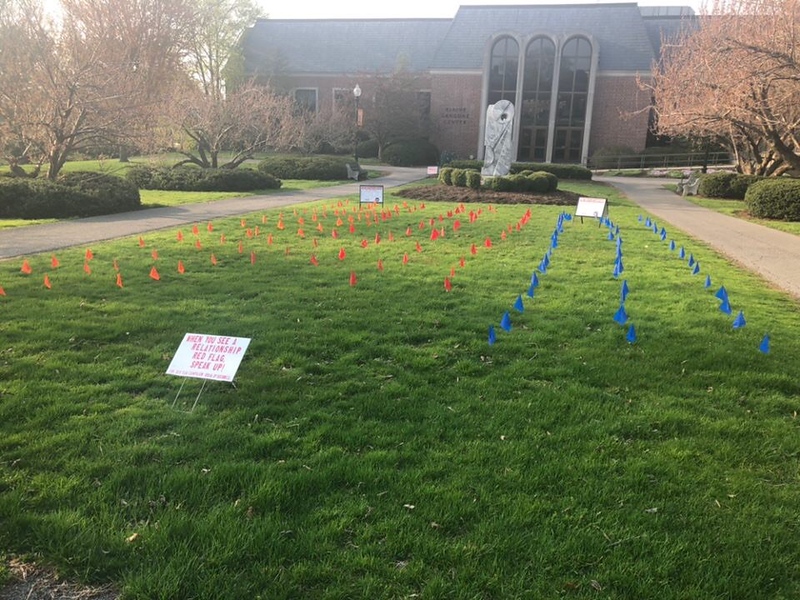 SpeakUp is a peer education organization that is dedicated to eradicating sexual violence on campus and educating students on how to prevent and handle instances of sexual violence. The Red Flag Campaign is one of the many awareness campaigns and programs that SpeakUp brings to campus. Others include Take Back the Night, Fraternity and Sorority Ally training, and prevention education workshops.

The Red Flag Campaign invites students and community members to write warning signs of abusive or unhealthy relationships on red flags. The red flags are then displayed to encourage people to take action if they see these warning signs in relationships. In addition to the red flags, there are blue and orange flags for anyone who wants to write a message of support for survivors of sexual or relationship violence.

“The Red Flag Campaign serves as a participatory awareness campaign and bystander intervention tool. Bucknellians act proactively, alerting members of the community about the ‘red flags’ or warning signs of intimate partner violence, while simultaneously showing support for survivors with affirming, encouraging statements on the blue and orange flags. These words of encouragement support survivors no matter where they are on their healing journey,” Interpersonal Violence Prevention Coordinator Becca Geiger said.

The orange and blue flags create a circle around the red flags, representing a community of support for survivors, in addition to showing the number of positive bystanders who are willing to take action and step in to protect their peers from relationship violence.

“The event invites everyone in our community to be part of the solution and contribute to a campus culture that refuses to tolerate such violence. The flags create a visual reminder of our supportive community of positive bystanders who are willing to protect others from intimate partner violence and support victim survivors who have left or are attempting to leave an abusive relationship,” Geiger said.

SpeakUp’s hope is that the Red Flag Campaign will encourage students to intervene when they witness situations that could lead to criminal acts and help to prevent the issue from escalating into a potentially dangerous circumstance.

The University is one of over 500 college campuses to participate in the Red Flag Campaign, which remains one of the staple awareness events to help end sexual and relationship violence on campus.