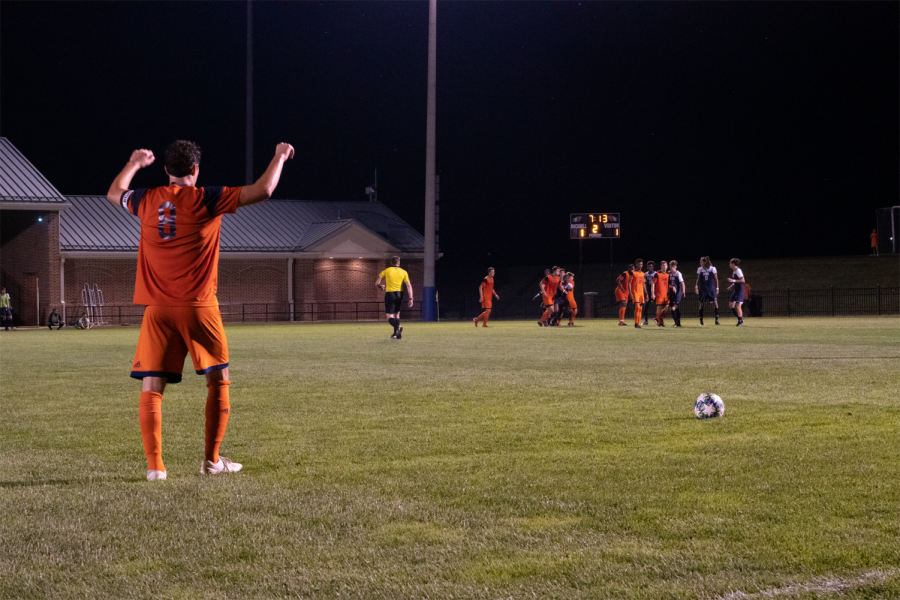 On Aug. 30, the Orange and Blue men’s soccer team competed in their home opener against Fairleigh Dickinson. In a back-and-forth game, the Bison came back from a one-goal deficit before Fairleigh Dickinson scored in the final minutes to secure the win. On Sept. 1, the Bison bounced back from the loss with a resounding 4-1 win over Canisius, giving the team a 1-1 record to start the season.

The Bison’s first game of the season proved to be a true test as the Bison started four true freshman. Neither side was able to break through in the opening 20 minutes of the game until Fairleigh Dickinson took the lead with a 21st minute goal. The Bison came out of the second half strong after being down 1-0 at the break.

Bernie Wright ’20 delivered a cross that Eddie Perez-Pelaez ’23 headed in the back of the net to equalize, his first goal of his collegiate career.

The Bison were unable to hang on for the draw as Fairleigh Dickinson scored in the final minutes give them the lead and secure the win. The Bison had five shots on target, but were unable to capitalize on those opportunities.

“Our coaches harped on communication and overall I think we were a lot more organized in our game this past Sunday. We have a lot of talent on this team, but at times we lack composure and take more touches on the ball than needed,” Wright said.

On Sept. 1, the Orange and Blue traveled to Buffalo to face Canisius. The Bison started the game well, with Wright assisting Perez-Pelaez to provide the Bison a 1-0 lead. Shortly after, another freshman made a big impact as Mo Tall ’23 set up Perez-Pelaez to double the Bison lead. It was Perez-Palaez’s second goal of the game and third of the season.

The Bison’s two goal lead extended to 3-0 after Matt Thorsheim ’21 set up Patrick O’Hara ’22. Canisius was awarded a penalty kick and cut the deficit to 3-1, but soon after Jacob Mittman ’22 found the back of the net, giving the Bison a decisive 4-1 lead and their first victory of the season.

“Our game against Canisius was a great step in the right direction. After a disappointing loss against FDU we were able to watch film with the coaches and address a few little mistakes we made as a team,” Wright said.

Both the Bison’s back line and goalie Emmett Witmer ’20 contributed significant defensive efforts in both games. Witmer came up with several crucial stops in the Canisius game, ultimately preventing the Golden Griffins from getting back in the game.

With the first weekend of play behind them, the Orange and Blue have big hopes going forward this season.

“An obvious goal for the year is to get back to the playoffs as we had a disappointing end to the season last year, with the hope of winning,” Wright said. “With four freshmen coming in and making a big impact already on the team, I think we are poised to make some noise in the league this year and compete for a championship.”

The Bison will look to capitalize on their momentum this upcoming weekend when they face Mount St. Mary’s at home on Sept. 6 at 7 p.m.