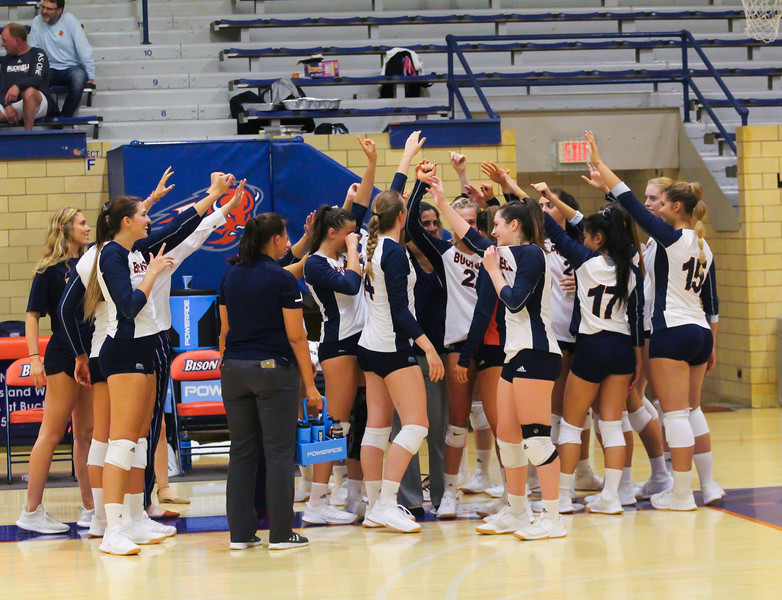 The Bison volleyball team hosted their home opener invitational on Sept. 6 and Sept. 7. Going up against Saint Peter’s, Siena and St. Francis Brooklyn, the team collected three victories over the course of the weekend.

On Sept. 6, the Orange and Blue competed against Saint Peter’s, ending with a 3-0 win. Mimi Richards ’20 led the Bison with 12 kills, three blocks and a pair of aces. Helping Richards lead the team was senior Sophie Bullard ’20, with 19 digs and eight kills. This week’s Patriot League Rookie of the Week, Kelsey O’Loughlin ’23, dominated the game with 26 assists and a pair of blocks.

On Sept. 7, the Orange and Blue took on both Siena and St. Francis Brooklyn. During the game against Siena, the Bison completed a second straight-set victory. The senior class took control of the court with Bullard and Richards earning a total of 21 kills. The highlight of the day came when Brooke Stark ’20 earned her 1000th career dig.

The Bison finished the weekend with a game against Saint Francis Brooklyn. The Bison defeated Saint Francis 3-1, with Richards and Bullard continuing to carry the team, leading with double-digit kills.

“This past weekend was really successful and fun. Our home opener for the season is something we all look forward to and going 3-0 is a great feeling,” Richards said. “As a team we got to experience what it’s like to lose a set but come back focused and win the match. We know what we have to work on in practice for future games, but we are excited for the rest of preseason.”

The Bison volleyball team will play next at the CCSU Invitational in New Britain, Conn., on Sept. 13 and Sept. 14, facing Rhode Island, Saint Peter’s, and Central Connecticut State.