Behind the scenes with Jay Sean at Fall Fest 2019 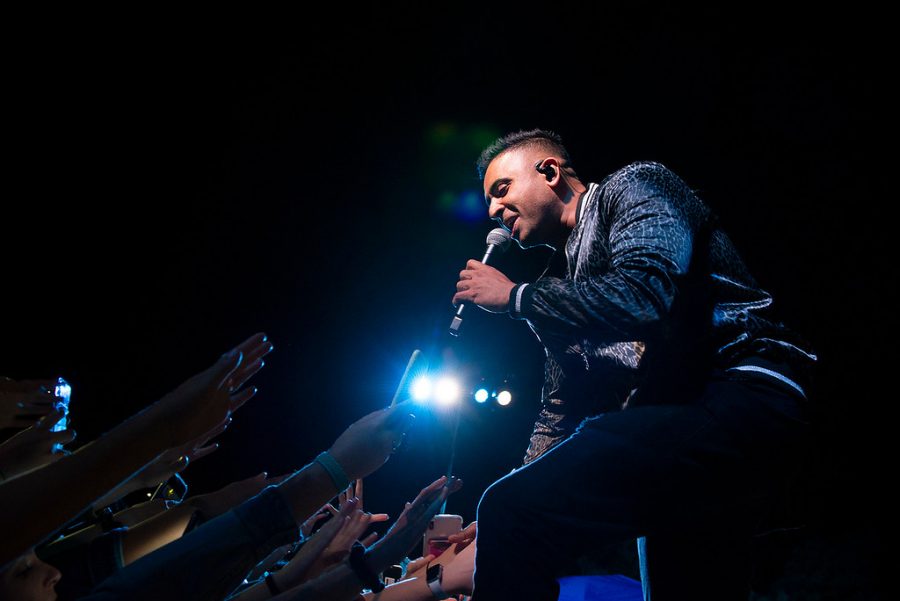 The Bucknellian writer Sarah Haber ’22 and News Editor Jess Kaplan ’21 – along with VBU manager Emily Brandes ’21 and Kaitlyn Ferentini ’21 – interviewed “Down” singer Jay Sean before his performance at the 2019 Fall Fest to learn more about the acclaimed artist.

Q: How did you get your start in music?

A: A long time ago, I was actually a medical student at the time. I had been doing music since I was 12. For a long time, I was DJing, singing and rapping — basically everything. I was writing songs and making a bunch of mixtapes, just for fun. Then I started doing local circuits and gigs, and even when I was at my university I was throwing parties and performing at them. Word started going around about this kid who just loved performing and one of my songs ended up at a local radio station. They ended up playing it a lot and that radio station got in contact with me and asked, “What’s your deal? Are you signed?” I was then introduced to Virgin Records — they signed me and the rest is history. That was 16 years ago.

Q: What would you say is the hardest lesson you have learned in the music industry?

A: As an artist, when you have a gut feeling, you should go for it. What happens is record companies, management, publishers, everyone has an opinion on what your next song should be. But you are the artist and you should know. You know your fanbase and you should be able to make that decision. Sometimes everybody else gets involved and they can put your trajectory in a completely different place than where it could be. And that’s the main thing – stick to your guns. If you feel it, then that should be your final choice.

Q: How has your sound changed since you started making music?

Q: Who are some of your favorite artists to work with?

A: I like working with so many different artists but for different reasons. Nicki Minaj was just fun. Me and Sean Paul have a great relationship and a great friendship because we’ve known each other for years. We’ve done two songs together already, traveled around the world and done many shows together. Lil Wayne was just incredible. To be able to work with him at a time when everyone wanted to work with him was such a blessing. There’s just so many. I’ve done close to 35 collaborations, including songs that you guys haven’t even heard of yet.

Q: If you could choose one artist who you haven’t worked with to make a song with, who would it be?

A: It would probably be Jay-Z or Eminem.

Q: Why do you like performing on college campuses?

A: I think there’s a lot of times where you can go around America and tour — especially like New York and L.A. — where they have so many people who come there to perform and sometimes they just get spoiled. They don’t even care. “Beyonce is coming? Maybe I’ll go, or maybe I’ll just go to Applebees instead.” They just don’t care. It’s not a big deal to them. Here, at colleges, students are just so grateful for a talent to come and it’s exciting. They get excited for weeks leading up to the show. It’s something super fun for them, so therefore when I perform as an artist, the energy that they give me is so much. They’re in it, involved and happy to have you there. Having that as a performer gives us energy. It’s always a lot of fun.

Q: Let’s end on a fun one — what is your hype song? We were wondering what song gets you pumped up because we listen to you to get hype!

A: That’s really, really interesting! Up until a few weeks back, it was Drake’s “Nice for What” because it’s super hype, it’s vibey, it’s up-tempo and fun. It’s funny you say that because I see so many videos on Instagram and stuff of people getting ready to go out and they’re listening to my songs, especially with “Ride It” on Tik Tok. But for me, it’s definitely one of Drake’s records.