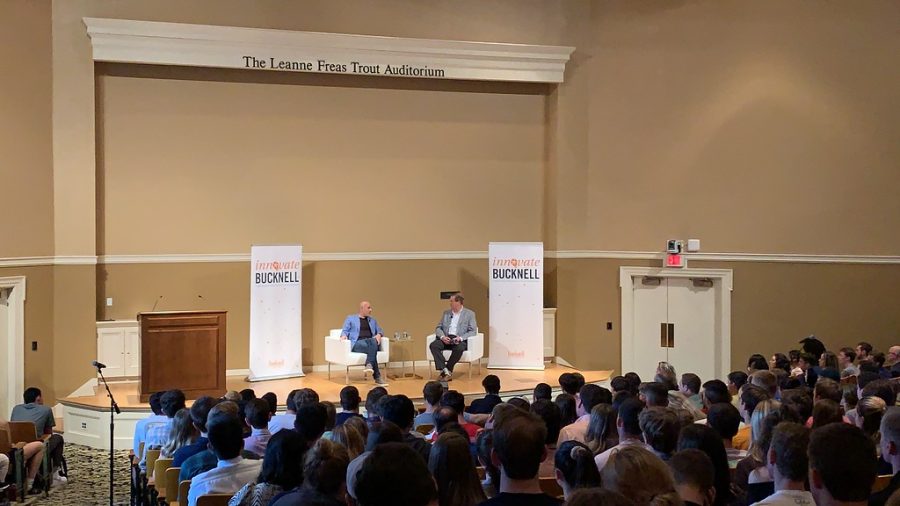 The “Innovate Bucknell Speaker Series” is a collaboration across all three colleges and the division of University Advancement which invites speakers to share their knowledge and passion for entrepreneurship and innovation. According to Assistant Director of Career Development Megan Wolleben, Lore was chosen to introduce the series as “Marc’s drive to forge his own meaningful path to success started while he was here on campus.”

While at the University, Lore created his own interdisciplinary major that combined Business Management and Economics that laid the foundation for his career in business. Addressing University students, Lore said he is still certain that “Bucknell is still one of the best business schools in the U.S.” After graduating, Lore earned his MBA at The Wharton School – University of Pennsylvania and worked in the finance industry for seven years, but quit abruptly to pursue his true interest in entrepreneurship.

Lore describes himself as a “serial entrepreneur” as he has successfully started and sold four companies. His most recent company, Jet.com, was acquired by Walmart for $3.3 billion in 2016. Following the acquisition, Lore was appointed president and CEO of Walmart eCommerce. Prior to that, Lore sold his third company Diapers.com for $545 million to Amazon. Lore attributes his entrepreneurial success to his ability to “put [himself] in a position when failure is not an option” and his willingness to “just take the biggest step you have towards your idea.”

Sam Ritter ’20 admires Lore’s brave entrepreneurial spirit. “He mentioned how he invested $390,000 into his company and that was literally every cent he had. That is incredible dedication and courage,” Ritter said.

Lore regards his sale of Jet.com to Walmart as a “tool to reach [his] vision quicker with less risk.” In the three years Lore has worked at Walmart, he has set forth a number of cutting-edge initiatives to leverage Walmart’s already strong assets, such as an in-fridge delivery service, customized ordering and aspirations to create augmented reality shopping. Lore’s dedication to making Walmart the most trusted retailer is guided by his three core principles of “trust, transparency, and fairness.”

Lore ended the discussion by encouraging University students to “focus on what they’re most passionate about.” He also highlighted the importance of finding a mentor for students looking for their first job opportunities. “Much more important than the company or the job is who you work for,” Lore said.