Field hockey cashes in on penalty corners in 6-1 victory 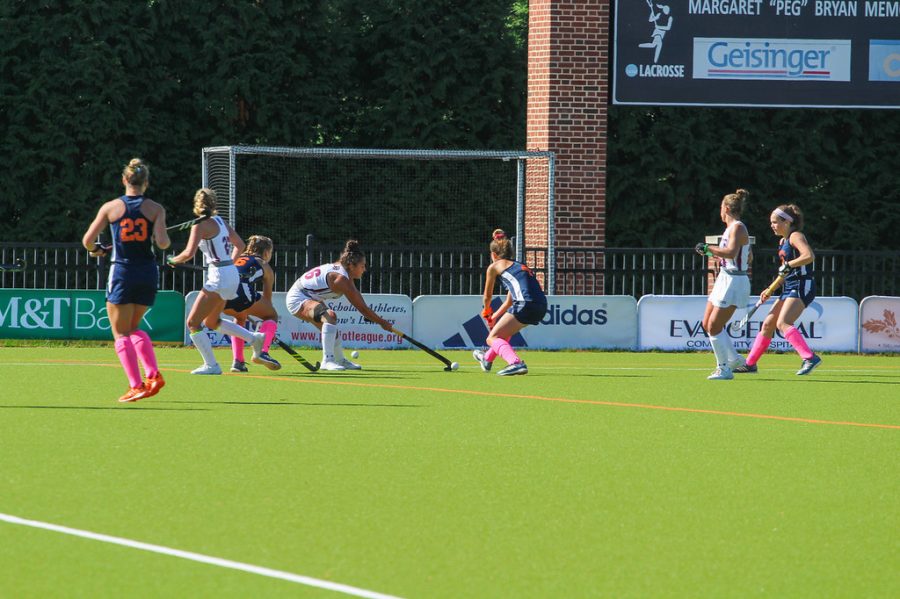 In their fourth Patriot League game of the season, the Bison field hockey team scored six goals against the Colgate Raiders on Oct. 19 for a 6-1 win. Kaelyn Long ’21 and Leah Fogelsanger ’21 scored two goals apiece. Megan Keeney ’21 and Marisa Morakis ’20 added the remaining two goals of the game.

The Orange and Blue were quick to get on the board, as Morakis netted her first goal of the year a mere four minutes into the game. Long posted her first assist of the day on Morakis’ goal. Long went on to score her first goal only a few minutes later off of a penalty corner.

“Getting a win against Colgate was a great feeling. It was a high energy game as we were able to score first to get our momentum going,” Long said. “It was also our Pink Out game so it was so cool having the opportunity to play for a cause that was bigger than us.”

The Raiders attempted to mount a comeback, scoring their first goal of the game in the 52nd minute. However, in the last six minutes of the game, Fogelsanger notched two more goals, making the final score 6-1. Fogelsanger also led the team with five shots.

“After coming off a set of three games over fall break, having only one game this past weekend was a big change but allowed us to focus on a singular opponent,” Fogelsanger said. “The win over Colgate was a great display of what our team can do when we execute successfully on penalty corners and work together on the field. While we still have objectives we need to work on, the team has gained a new confidence that allows us to go into more league play with a better mentality.”

The Orange and Blue will face Lafayette in Easton, Pa. on Saturday, Oct. 26 at 12 p.m. The Bison will look to clinch a tournament spot as they currently sit in third place in the Patriot League, one spot below the Leopards. The top four finishers will qualify for the conference tournament.