Survivors, advocates and allies rally at Take Back the Night 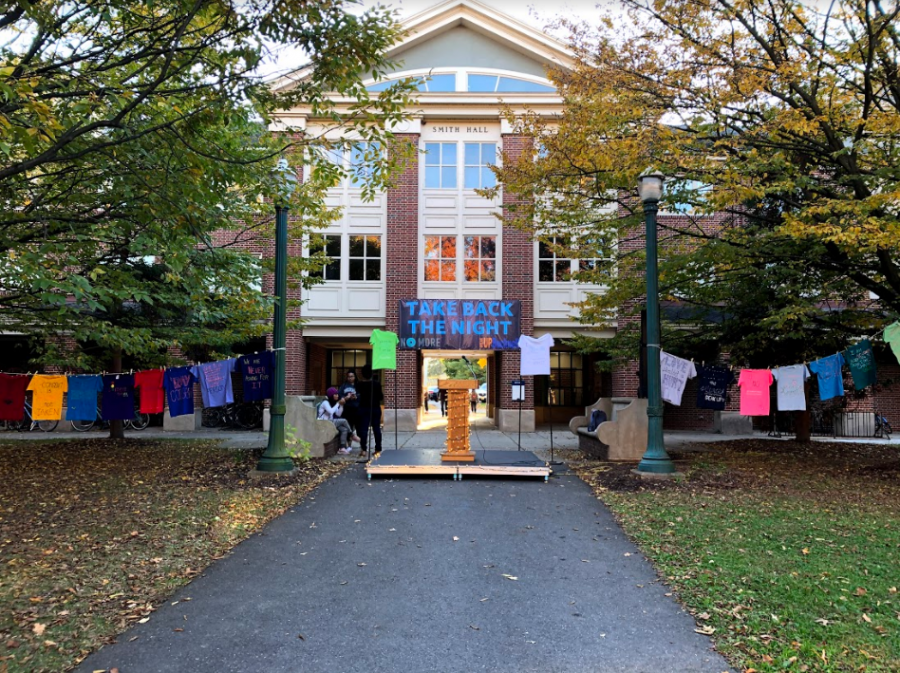 The Smith Hall Quad was filled with students, allies, survivors and faculty alike on Oct. 28 for one reason: to come together to end sexual violence on the University’s campus.

Take Back the Night, the penultimate event of No More Month, was hosted and presented by Speak UP Bucknell. The Smith Quad was adorned with lights and T-Shirts decorated to express support for survivors, as a part of the Clothesline Project.

“The point of the event is for everyone to come together, as one community. To stand in our commitment to end sexual violence, relationship violence, stalking, and sexual harassment here on campus and to support survivors,” Speak UP’s Interpersonal Violence Prevention Coordinator Becca Geiger said.

Throughout the night, attendants made signs, University faculty addressed the crowd and survivors, and allies bravely spoke on personal experiences. Following the Speak Out program, all were encouraged to join a vigil and solidarity march, before a debrief in Larison Hall.

“I thought that the ‘Take Back the Night’ event was incredible. I was so impressed by the people who had the courage to get up and share their stories with the community,” Samantha Swartz ’20 said.

Speak UP peers Matt Drescher ’20 and Lilly Shaner ’21 opened the Speak Out portion of the evening by calling for an end to sexual and dating violence at the University. They spoke about the importance of becoming an active bystander in order to confront perpetrators.

Drescher and Shaner then introduced University President John Bravman to the podium, where he spoke in support and awe of the bravery of the survivors who later came forward with their experiences. He urged the University’s students to look out for one another. Bravman also expressed his disappointment and frustration with lower levels of attendance at this year’s event, compared to years past. However, the message and passion still rang loudly throughout the night.

“Hearing the speakers and performers at Take Back the Night was very powerful to me and speaks to how relevant the issue of sexual violence is on Bucknell’s campus,” Tatum Contreras ’20 said. “It was disappointing to see how much lower the turnout was than in previous years, but nonetheless, it was reassuring to see victim-survivors, allies, and advocates come together to stand in solidarity for those affected by sexual violence.”

Five survivors later came forward to share their stories with letters, speeches and poems. One survivor, after sharing her story, sang a rendition of Maggie Rogers’ “Back in my Body.”

Kelsey Hicks, the director of the Women’s Resource Center, spoke to the crowd about her wish for every student at the University to walk around campus free of the fear of sexual violence and discrimination. The University’s Interfraternity Council President spoke on the council’s commitment to changing the culture around sexual violence on campus. The council partnered with Speak UP to bring educational training programs to new members of Greek life at the University.

Members of two of the University’s a cappella groups, The Silhouettes and Beyond Unison, joined together to perform Ke$ha’s “Praying.”

As the program ended, attendants cracked glow sticks, illuminating the crisp fall evening. Speakers and attendants were then encouraged to join Speak UP peers in a solidarity march. Survivors, allies, and advocates marched behind a “No More” banner, holding their own signs expressing their support to end sexual violence at the University.

“It’s really meant to be an empowering night, and a call to action,” Geiger said.