Looking forward to Dayeinu! Beyond Survival 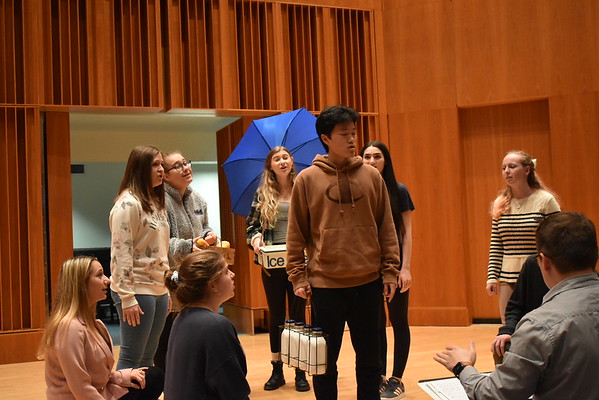 With November quickly approaching, the Bucknell Opera Theatre has been busily preparing to kick off this year’s Holocaust Education Week, also known as “Dayeinu! Beyond Survival There is Hope.” In Judaism, “Dayeinu” or “Dayenu” is one of the most significant and well-loved songs, which is traditionally sung during Passover.

The song symbolizes the course of Jewish history from enslavement in Egypt to the construction of the Temple of Israel. It serves as a reminder to exercise restraint in capitalistic consumption. Alone, “Dayeinu” means “it would have been sufficient for us.” In accordance with the story and meaning of the song’s namesake, the chorus following each stanza reiterates the idea that if God’s intercession into the lives of Jewish people was his only intercession during this long formative period, then that would have been sufficient. The song serves as a reminder that there is always an alternative to greed, and in order to enjoy the little things, we must first have regular moments of self-control.

Learning from the Holocaust

At the University, “Dayeinu! Beyond Survival There is Hope” will run from Nov. 2 to Nov. 9. The University’s opera will run workshops, lectures, films and performances that demonstrate to students and the public alike how to honor the victims of the Holocaust, how to heal from the widescale trauma and how to commemorate the time period and its victims.

A “Teacher Continuing Education” event and a film screening of “Shoah” on Nov. 2 will kick off the week, and more events will be held afterward leading up to the opera’s performance of “Brundibar.” During “Teacher Continuing Education,” University faculty will facilitate a discussion about the relevance and importance of Holocaust education from 9 a.m. – 1 p.m. in the Siegfried Weis Music Building. Professor Emeritus of English Harold Schweizer and Professor of Education Sue Ellen Henry will both speak at the event, in addition to other faculty members.

Afterward, “Shoah” will play in the Gallery Theatre of the Elaine Langone Center from 1:30 p.m. to 10:30 p.m., with intermissions. Directed by Claude Lanzmann, this 1985 film leaves no stone unturned in documenting the opinions, memories and facts from the personal experiences of survivors, witnesses and perpetrators of the Holocaust. True to his mission, Lanzmann refused to use a single second of archival film, and he painstakingly interviewed survivors ranging from an Auschwitz escapee to an S.S. officer of the gas chambers at the Treblinka extermination camp.

The following day, our students and community will have the privilege of listening to Rabbi Elizabeth Bolton and the University Opera discuss the poetry and life story of Hilda Stern Cohen. This event, titled “For Tomorrow: The Story and Poetry of Hilda Stern Cohen,” will occur at 4 p.m. in Rooke Recital Hall. Speaking of an orphaned Holocaust survivor and poet from the farming village of Nieder-Ohmen, Cohen’s story is one about the sudden uprooting and extreme trauma she experienced and continued to write about from the time she was eight years old.

Additionally, Dayeinu will feature a presentation from Dr. Rona Buchalter of HIAS Pennsylvania — an organization providing legal and social services to low-income immigrants and refugees in the Philadelphia area. This event will occur on Nov. 4 and will provide more insight into the actual situations and conditions of refugees. Later, at 7 p.m. in Bucknell Hall, the showing of “Refugees Then and Now” will offer more insight into the Holocaust and religious persecution of Jews today.

On Nov. 7, the University Opera will again perform in “Songs of the Holocaust” at 12 p.m. in Rooke Chapel. Their performance will be followed within the next two days by Brown University’s Professor Omer Bartov’s “Anatomy of a Genocide: The Life and Death of Buczacz” and a Jewish Shabbat service and dinner.

Finally, the University Opera will conclude the week with its double performance of “Brundibar” on Nov. 9 at 11 a.m. and 6:15 p.m. in the Opera Theatre in the Weis Center for the Performing Arts.

Written in 1939 by Jewish Czech composer Hans Krása, “Brundibar” was originally performed by the children of Theresienstadt concentration camp in Czechoslovakia, which was occupied at the time of the opera’s first performance in 1942. These children were forced to put on a show for an International Red Cross committee, which came to inspect the camp for safety breaches. The story follows two children attempting to earn money for milk, so they can tend to their sick mother better, only to be thwarted by evil antagonist Brundibár. Unsurprisingly, Brundibár represents Adolf Hitler, and the plotline of the opera represents the Jewish struggle against his powerful reach.

“I think it’s really pivotal to sing in an opera written and performed by victims of the Holocaust, some of whom were just children then,” Jon Riker ’22, a member of the University’s Opera, said. “It’s terrifying to think about, and I hope that Bucknell students of all backgrounds will benefit from this educational week.”

Even in the University Opera’s preparatory rehearsals, the energy and excitement of the performers — the deeper intention behind their expression that only comes from a sense of empowerment in educating the public about such a difficult subject — can be felt.

Katie Fonda ’23, also a member of the Opera, recognizes the significance of Dayeinu at the University. “It is so important that we all take some time to reflect on what has happened in the past so that we can heal and prevent similar things from happening in the future,” she said. Through these events, she hopes this week of remembrance will educate the University and the surrounding community. Truly, this week aims to induce sincere reflection in students and Lewisburg families alike.

There will be several other film screenings, discussions, and events throughout the week. The full Dayeinu schedule can be found on posters around campus or on the University’s website.