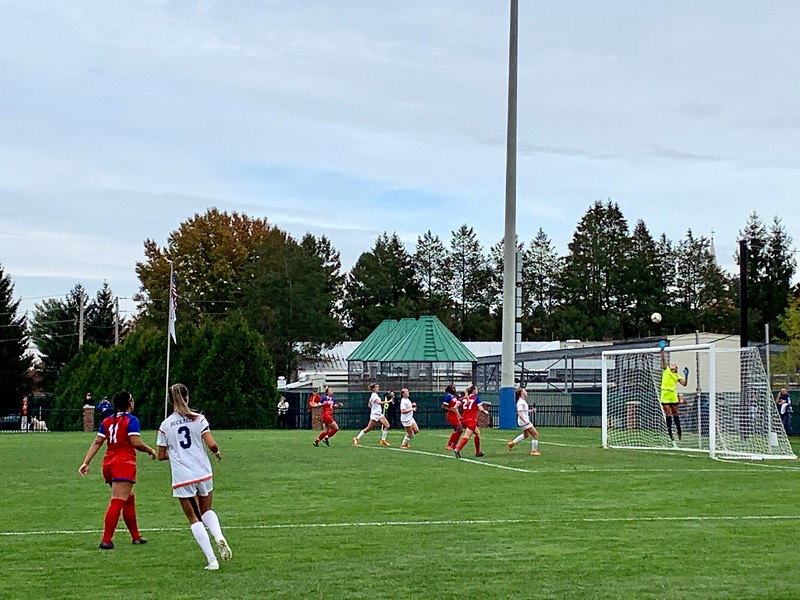 The Bison women’s soccer team tied American University, 1-1, in their last home game of the season on Oct. 26 at Emmitt Field, commemorating the occasion with one final walk through the tunnel on a game day. Prior to the game, the team’s six seniors were honored, including Gabby Bair, Bailey Hurst, Dani Kaufman, Ali Russo and Lilly Courts.

American was quick to capitalize, scoring 11 minutes into the game. The breakaway goal by the Eagles left the Bison ready for a fight. At the 27-minute mark, Bair controlled the ball 30 yards down the right sideline, which led to her perfect pass to Abby Gearhart ’23. Gearhart one-timed the ball into the net, collecting her third goal of the season. At the end of the first half, the Bison had another opportunity to score, but the shot by Emilene Parham ’22 went wide.

The Bison dominated the second half of the game, out-shooting American and controlling possession. However, the Eagles provided another dangerous opportunity to score with nine minutes remaining on the clock, ultimately saved by Kaylee Donnelly ’23.

In overtime, the Bison had five corner kicks but were unable to capitalize. Donnelly had an additional two saves in the extra session.

“I’m so proud of how hard we fought in Saturday’s game against American. Although emotions were high on senior day, the team was able to stay focused on the game and earn us a crucial point in our league,” Bair said. “Our one focus this week is to prepare for a very important last regular season game on Friday at Holy Cross to lock our spot in the tournament.”

The Orange and Blue will be back in action against Holy Cross on Nov. 1 at 5 p.m. as they round out regular season play and look to clinch a Patriot League Tournament berth.