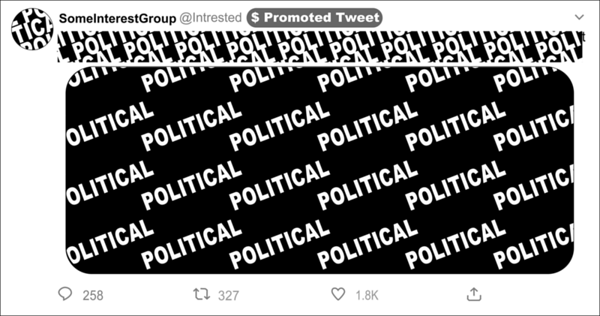 In the midst of a whirlwind of false information and corrupt advertisements allowed by greedy social media companies, especially Facebook, Twitter’s CEO, Jack Dorsey, has done the most responsible and ethical thing possible by barring all political advertisements from the platform.

In this cessation of political advertising, Twitter may be taking a cut to their income, but I believe that, overall, it will help the company in the long run while simultaneously allowing users to feel more secure in what they are reading online.

While it may be optimistic thinking, it is possible that Twitter’s move will set a precedent for other platforms in the future to follow suit and put the best interest of their users at the forefront of their business plan.

Social media is permeating the lives of practically everyone in one way or another, and many users are beginning to recognize that they are being taken advantage of when flagrantly false information is conveyed to them as fact through political advertising — almost solely because high-level technocrats such as Mark Zuckerberg are putting personal wealth over community well-being.

Stopping political advertisements overall and forcing politicians to find a new way to reach and establish a solid base is widely preferred to having blatantly false statements being cast as truth by politicians who are wealthy enough to put those claims out there.

Although in an ideal world no one would put out false information and this would not need to be regulated whatsoever, no information, in this case, is better than complete lies.

This is not to say, however, that the decision is perfect.

People deserve to have access to information for free and on any platform that they feel comfortable using, especially as social media becomes increasingly prevalent in everyone’s daily lives. The best answer is that until a better solution is reached, the decision is one that works to save people from misinformation.

This then raises the question as to what will be the next step in this process. What is a better solution to cutting out political funding altogether?

As it stands right now, it is practically impossible to screen every single political advertisement that is paid for and intended to be posted on social media platforms, but that does not mean it has to remain that way. This shift in the way information is being presented can open the door for a whole new line of work that is just waiting to be untapped.

There are reports now of artificial intelligence making certain jobs obsolete in the coming years, but this — fully fact-checking — is one thing a machine cannot effectively do, at least now, or else Twitter would have implemented that strategy instead of cutting a source of income and getting rid of political advertisements entirely.

If Zuckerberg cares about solid journalism as much as he claims to, he would have no problem hiring people to fact-check the advertisements that are to be posted on Facebook beforehand so as not to feed his users complete lies. Besides, he is already paying journalist organizations for their work, so paying people to fact check would have the same objective: providing people with reliable, truthful information.