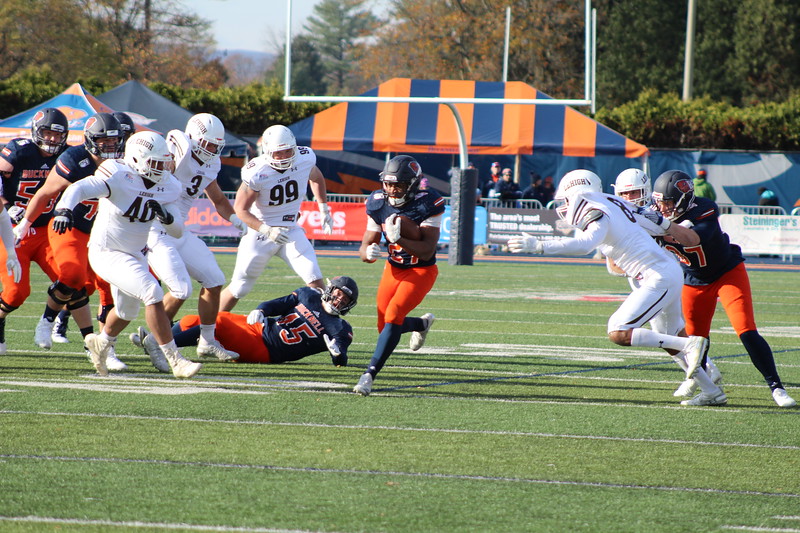 In the first half, the Bison limited Lehigh to just 67 yards of offense through the air. Looking to score first, the team set up a drive that resulted in recent walk-on Tyler Keiser’s ’21 first career field-goal from 20 yards out. The Orange and Blue extended their lead to 10-0 after Stefone Moore-Green ’20 scored his first career touchdown following a 73-yard drive.

In the second half, the Bison were able to come up with a goal-line stop that led to a missed field goal for Lehigh. Later in the quarter, John McGuire ’21 made an incredible one-handed catch on a pass from Logan Bitikofer ’21. Despite pressure in the fourth quarter, the team held on for a 20-10 final victory.

Leading the defensive effort was Rick Mottram ’21 with a team-high 10 tackles. This was the second game in a row in which Mottram recorded double-digit tackles. Simeon Page ’21 claimed two sacks throughout the game, and Gerrit Van Itallie ’21 also contributed with six tackles.

The Bison proved to dominate not only defensively, but offensively as well. Bitikofer threw two touchdown passes while completing 23 of 39 passes for 190 yards. Chad Freshnock ’20 and Jared Cooper ’22 rushed for 64 and 44 yards, respectively. Keiser converted two field goals. With this team effort, head coach Dave Cecchini earned his first home victory in the Christy Mathewson-Memorial Stadium over his alma mater.

“Overall, defensively it was our best performance as a unit. We played together and made a lot of impact plays and the score reflected that,” Brandon Benson ’21 said. “We are definitely headed in the right direction and we still haven’t scratched the surface. With another league game next week against Georgetown we need to carry the momentum from this week into that game and continue to build on that.”

The Bison will host Georgetown and honor the team’s seniors on Saturday, Nov. 16 for their last home game of the season. The game will take place at Christy Mathewson-Memorial Stadium at 1 p.m.