Women’s basketball records back to back wins 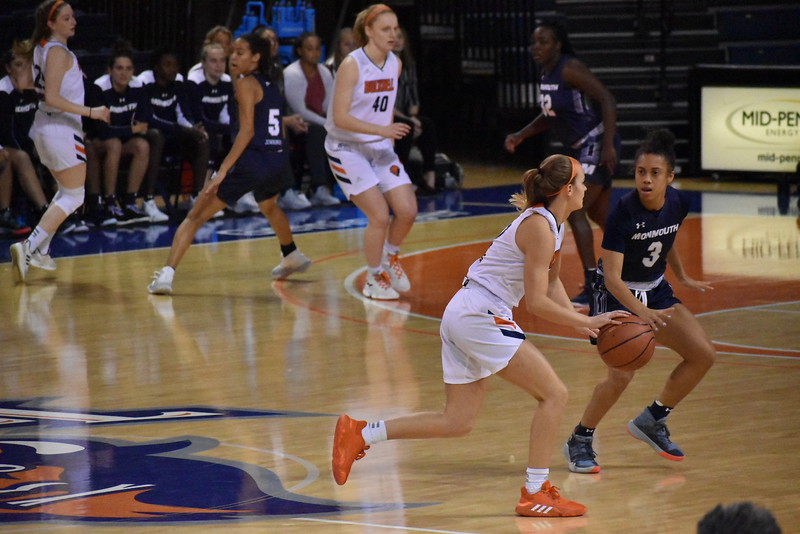 The Bison women’s basketball team put on a show during their home opener 71-37 win against the Monmouth Hawks on Saturday, Nov. 9 at Sojka Pavilion. This was the team’s, and new head coach Trevor Woodruff’s, first win in the 2019-20 season. Abby Kapp ’21 led the Orange and the Blue with 13 points, while Ellie Mack ’20 and Ally Johnson ’21 each added 12 points. This is Mack’s ninth game recording double-digit points, helping lead the Bison to a victory.

The saying goes that defense wins games, and the Bison proved this to be true as the team forced 23 turnovers as it held the Hawks to 24.5 percent shooting. The Bison defense held the Hawks to under 10 points in three out of the four quarters.

“We were really excited to play our first home game of the season and get Coach Woodruff his first Division I win. I think that our focus and determination leading up to the game allowed us to come away with a great team win,” Kapp said. “We really focused on our defensive efforts in our practices leading up to the game on Saturday. Our coaches preach the importance of our team’s defensive constants that we try to accomplish every defensive possession and I think that we were able to do that against Monmouth.”

Offensively, the team finished with 42.1 percent on field goals and executed 8-of-18 from behind the arc. In the first quarter, the Bison dominated offensively 18-7. By halftime, the Orange and the Blue led by 14 points. In the third quarter, the Bison outscored the Mountain Hawks 22-7.

To secure the win, the Bison went on a 12-0 run that lasted into the fourth quarter, putting the team up by 33 points. The freshman duo of Carly Krsul ’23 and Tai Johnson ’23 added their first collegiate points, as Krsul finished with six of the Bison’s 13 fourth-quarter points. Johnson finished with a layup and went 2-for-2 from the foul line.

On Nov. 13, the Bison took down St. Bonaventure by a score of 68-60 at Sojka Pavilion. The Bison had a well-rounded offense with Johnson scoring 17, Kapp scoring 16, and Mack chipping in 13. The Orange and Blue also played stifling defense holding St. Bonaventure to 35 percent from the field. They will look to continue their unbeaten run on Nov. 16 as they travel to Hamden, Ct. take on Quinnipiac at 2 p.m.