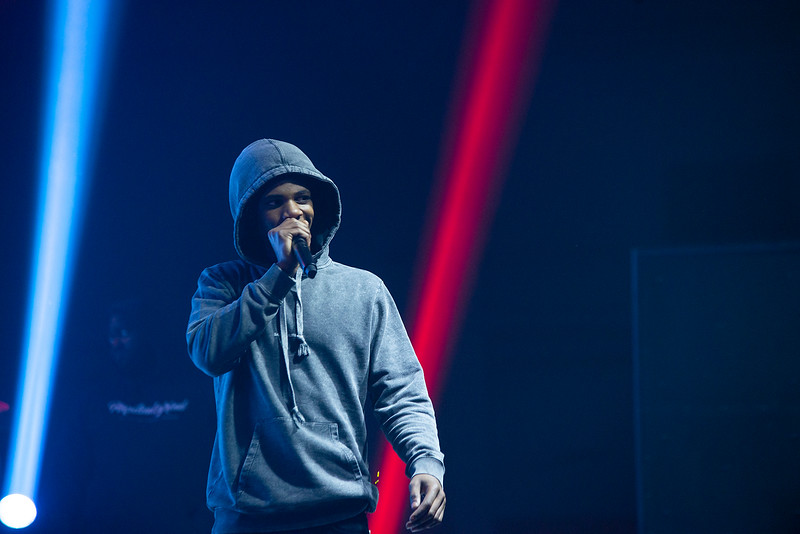 On Friday, Nov. 8, DJ/producer duo Two Friends and the rapper A Boogie Wit da Hoodie took the stage at this year’s Fall Concert in the Gerhard Fieldhouse.

Two Friends performed first at the Fall Concert, opening with remixes of various popular songs. Both Matt Halper and Eli Sones of Two Friends made remixes of these songs live. The two performers were dancing around the stage and jumping up on the DJ table. Their set built up to their iconic Big Bootie Mixes, an hour-long mix of pop songs with millions of SoundCloud streams. They also brought saxophonist, Andres Diaz, to perform along to their remixes and give their electronic songs a jazz-like feel.

“I liked how Two Friends had a saxophonist perform with them. It changed up the remixes and Big Bootie Mixes that everyone knows and it added a new element to them. I also liked the animations that they had playing behind them, —it made their performance exciting to watch,” Rachel Milio ’22 said.

A Boogie Wit da Hoodie opened his performance with his hit song, “Look Back At It,” which has over 332 million streams on Spotify. He performed songs from four of his albums: Artist, The Bigger Artist, International Artist and Hoodie SZN. Some of the well-known songs of his that he performed included “Drowning” feat. Kodak Black and “Swervin” feat. 6ix9ine. Smoke machines and animations accompanied A Boogie Wit da Hoodie’s performance.

“I thought A Boogie Wit da Hoodie was amazing to see live in concert. I had a fun time singing along to his songs with my friends. Overall I thought that the Fall Concert was a great way to bring everyone together for a fun night,” Charlotte Simon ’22 said.

These artists were brought to campus by the Concert Committee, a group of students who annually select a performer to bring to campus based on the musical preferences of the students at the University. In the past, they have brought performers such as Steve Aoki, AJR and Migos to the University.

The Concert Committee works throughout the semester to prepare for the event, including advertising the concert to the student body and selling tickets. “The day before the concert, we arrived to the field house at 3 p.m. to move production equipment off the trucks and begin assembling the stage, lights and sound equipment. The day of the show, we prepare the artists dressing rooms, making sure everything is perfect for their arrivals,” Concert Committee Chair Lindsey Moy ’20 said. According to Moy, the Concert Committee sold over 2,200 tickets to the event.

“I loved seeing concert-goers have the time of their lives with Two Friends, and how excited they were when A Boogie wit Da Hoodie opened with his hit song ‘Look Back At It,’” Moy said.