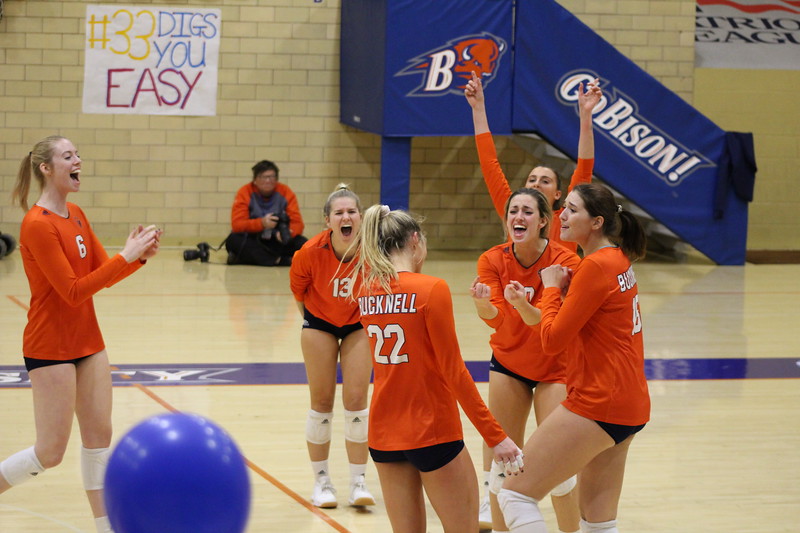 On Nov. 16, the Bison volleyball team suffered a 3-1 loss to the Colgate Raiders. The Orange and Blue celebrated their Senior Day at Davis Gym prior to the game.

The first set was back and forth. Despite being down by 10 points, the Orange and Blue almost came back, scoring four points in a row. Kelsey O’Loughlin ’23 scored two service aces in a row to cut into the Raiders lead, but it was not enough. Colgate took the first set 25-14.

The Orange and Blue stood strong and won the second set. The score tied five different times during the second set, each team being up a few times. The Bison went on to score five points in a row – putting them up 21-20 – and eventually scored four more points to secure victory in this set.

Colgate was able to maintain their lead through the third and fourth sets, leading them to win the match. The Raiders are set to be the top seed in the upcoming Patriot League Tournament with a 15-1 record in conference.

“Although our season didn’t go exactly as we would’ve wanted, Senior Night was an incredible way for the seniors to end their careers, and for the team to end our season as one,” Selby Schnobrich ’20 said. “This team is so close; it’s sad to see our time on the court together end, but as seniors, we are incredibly proud of the legacy we are leaving and we are excited to see what this team is going to accomplish in future seasons.”

Bison seniors made strong contributions to the match on their Senior Day. Sophie Bullard ’20 had 19 kills on the day, as well as 10 digs. Brooke Stark ’20 led the team with 12 digs over the course of the match, and Schnobrich led the team with 23 assists. Mimi Richards ’20 finished her career as the Bison’s all-time leader in block assists.

“The season, record-wise, didn’t go as we had hoped. But the team faced obstacles, and we were able to come together and overcome injuries and exhaustion, while still maintaining our love for the game. For all the seniors it was a great last season! We are all so grateful for our four years on the Bucknell volleyball team,” Richards said.

The Orange and Blue concluded their season with a 14-14 overall record, and a 3-13 record in Patriot League play. Despite the tough loss, the Bison are eager to start preparing for their Fall 2020 season in the coming spring. The Orange and Blue are graduating five strong seniors: Bullard, Stark, Schnobrich, Richards, and Bridgette Holland ’20; however, they hope to continue with another successful season next year with new faces joining the team.