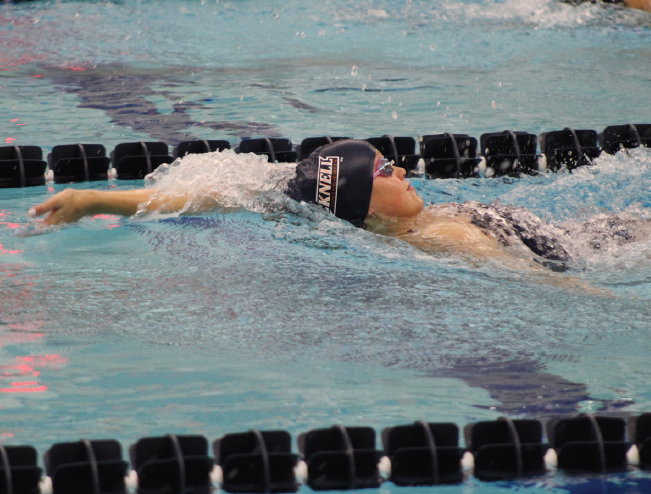 The Bison men’s and women’s swimming and diving teams faced Patriot League rival, Loyola, on Nov. 23 in Baltimore. The women’s team improved their record to 6-1 on the season with a 171-129 win, while the men’s team suffered a tough 187-108 loss to bring their record to 5-2.

Alexis Faria ’22 and Maggie Wyngowski ’21 also placed first in the 200 butterfly and the 200 individual medley (IM). Catherine Craig ’23 placed second in the 200 breaststroke; however her time of 2:19.54 marked the eighth-best time in the University’s history. With this win, the Orange and Blue women improved to 5-1 in the Patriot League.

“Loyola hasn’t always been a team that we worry about, but they have been rising the ranks this year, so to win the meet we knew that we would have to swim well. Throughout the meet, we had amazing swims that ultimately got us the win. It was a great way to go into break,” Hadley said. “This week we have our mid-season champ meet, so coming out of that win we are hoping to have more great swims and show the rest of the league what we are made of.”

On the men’s side, the Bison still earned some first-place victories against the Greyhounds, despite the ultimate loss.

In light of the loss, the Bison men’s team is still 4-2 in the Patriot League and hopes to continue improving in upcoming meets.

The Bison men and women will both compete in the Bucknell Invitational at Kinney Natatorium from Dec. 6-8. In addition, some of the Orange and Blue will travel to compete in the U.S. Open in Atlanta from Dec. 5-7.