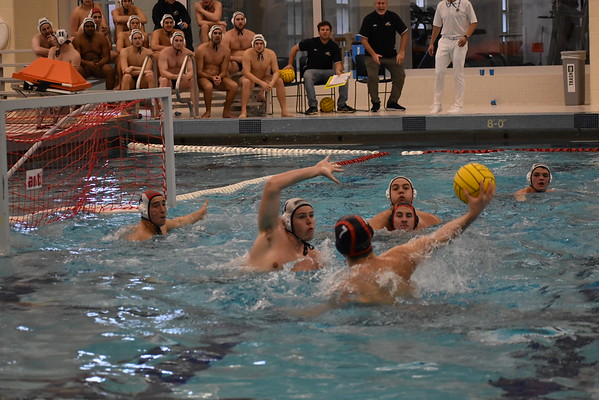 The Bison men’s water polo team topped the undefeated Harvard Crimson by a score of 13-12 in the first round of the NCAA tournament on Nov. 30 in Cambridge, Mass. This was the Bison’s first NCAA tournament win since defeating Loyola in 1985. The Bison advanced to the quarterfinals against No. 2 University of Southern California (USC), the defending national champions, on Thursday, Dec. 5. The Orange and Blue qualified for the NCAA tournament by winning the MAWPC tournament with a victory against George Washington, avenging a loss from the 2018 championship tilt.

The first half was an offensive showcase for both teams, with Harvard leading 6-5 after the first quarter. Logan Schofield ’20 started off the scoring for the Bison by drawing an ejection and setting up a penalty shot for Rade Joksimovic ’20. He then scored a second goal himself for the Orange and Blue in the first quarter.

The first period alone consisted of five ties and four lead changes, with the Bison taking their first lead with 4:40 left to play in the first. After Harvard tied the game up, Schofield tallied another goal for the Bison to reclaim the lead. The Crimson followed with back-to-back fouls to give them the one-goal advantage going into halftime.

Harvard scored again to open the second half, leaving the Bison down by two. Cullen Jacuzzi ’20 and Joksimovic teamed up for another goal to bring the Bison back within one. Jacuzzi then followed up with a goal of his own to tie the game up at 7-7 with six minutes left in the half.

It was a back and forth battle the rest of the game, but goals from several different players on the Bison helped the team secure its ticket to California for the NCAA quarterfinals. Adrien Touzot ’23 made several key stops in goal for the Bison, including his biggest save of the day with only 15 seconds left which stopped the Crimson’s last effort at tying up the game.

Joksimovic led the Bison with six goals, Schofield added three, while Jacuzzi, Jared Stanley ’21, Cooper Dolan ’20 and Andu Vlasceanu ’23 all chipped in a goal each.

“The best part of this game was that each member of our team played a huge role in the win. To accomplish what we accomplished, it had to have been a group effort and everyone played a part. Without our coaches, we would not have been able to do what we did. Despite many of us being sick during the game, we were able to band together and pull out a remarkable win for the program,” Joksimovic said.

The Bison faced USC in the quarterfinals on Dec. 5.