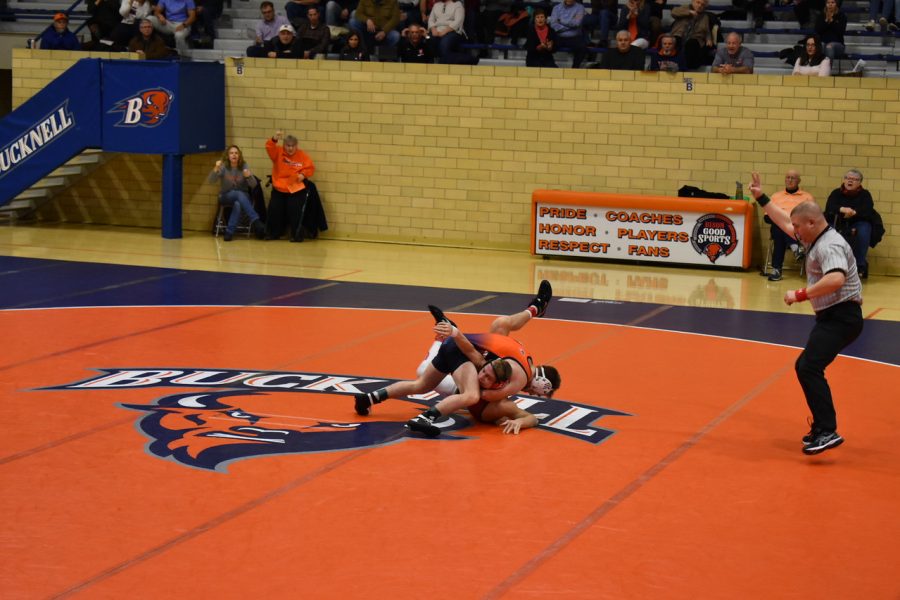 On Jan. 18 in front of a crowd in Davis gym, the Bison wrestling team utilized a late burst of momentum to top the Harvard Crimson, 26-12. Just the next day, the team faced Brown, defeating the team 31-3. With their most recent successes, the team’s record moved to 4-3 overall and 3-1 in EIWA.

Zach Hartman ’22 led the way for the Bison against Harvard, pinning his opponent in the first period in the 165 lb. weight class. Taking only one minute and 10 seconds, he improved his individual record to 17-6 on the season.

Mitch Hartman ’20 and Kyle Inlander ’20 collected victories by major decision in the 174 lb. and 184 lb. weight classes, respectively. Hartman bested his opponent by a score of 16-5 while Inlander won a commanding 8-0 victory.

Coming back from a 9-6 deficit in the dual meet, the Bison collected additional victories from Darren Miller ’23, Matthew Kolonia ’21, and Drew Phipps ’20 to secure the win.

Just the next day, the team once again took the mat to take on Brown Against yet another Ivy League opponent, the Orange and Blue captured nine of the 10 matches to win 31-3.

Once again displaying a prominent performance was Zach Hartman who pinned his opponent in just 1:55. Zach Hartman is ranked as high as 16th nationally in his respective weight class.

After a thrilling match filled with two takedowns and two back points, at 141 lbs David Campbell ’21 came back from a score of 3-1 to win 15-6.

Brandon Seidman ’22 and Inlander each competed in extremely close matches, battling throughout. For Seidman, his escape prompted a 3-2 victory, while for Inlander a last-second take-down lost him the match 1-3.

“The atmosphere was electric today, so I appreciate everyone who came out and supported us and helped us to the win today. From the very start of the match, it was going to be a tough, physical battle and I’m proud of every single one of the guys who stepped up,” Brandon Stokes ’20 said.

The Bison wrestling team will be back in action on Jan. 26 when they take on Sacred Heart at 2 p.m and Drexel at 4 p.m.

“I’m very excited because it’s the first time I saw these younger guys step up and thrive from the energy and that’s exactly what we need going into this stretch of EIWA matches through the rest of January and February,” Stokes said. “There’s definitely something special happening here and I’m thrilled to be a part of it.”