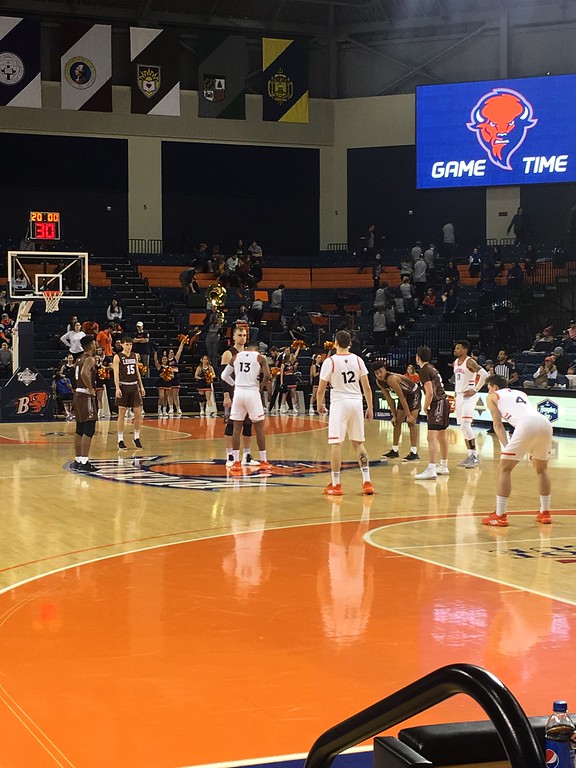 The last several days have been hectic for the Bison men’s basketball team, as they faced two tough Patriot League opponents within a span of three days. The Bison demolished Lehigh on Jan. 18 before having a quick turnaround to play Colgate only two days later, which resulted in a loss.

The Bison toppled Lehigh in Sojka Pavilion, winning with a score of 72-56. The Bison were dominant throughout most of the game, but Jimmy Sotos ’21 helped secure the lead with two 3-pointers in the final five and a half minutes of the game. The only time the Bison let up was at the beginning of the second half when they did not find the hoop for three and a half minutes. Lehigh only trailed by eight in the duration of the scoreless spell, but John Meeks ’21 ended the lull when he hit a 3-pointer.

Stat leaders on the day were Avi Toomer ’20 and Bruce Moore ’20 with 15 points each, followed by Sotos with 12 and Meeks with 11. Kahliel Spear ’22 also had a standout performance that included an iconic dunk as well as a second attempt at one.

The Bison moved to 4-2 in the Patriot League, as well as moving to a tie for second in the standings for the league.

Two days later, the Bison traveled to Hamilton, N.Y. to play the Raiders, who currently sit at first place in the league.

The game was played close, especially at the end of the first half where the Bison trailed by three with a score of 32-29. In the second half, Colgate was able to hold the lead mostly due to the number of 3-pointers they made. The Bison kept coming close, but could not quite catch up to the Raiders, who finished 14-for-23 from behind the arc.

“We’re competing, which is important, and are making steps in the right direction,” Sotos said. “We just have to maintain our level of focus and attention to detail throughout the course of the whole game.”

Despite the loss, the Bison had a strong defensive performance, with 10 forced turnovers. Andrew Funk ’22 led the team in with 16 points, while Meeks followed with 11, Toomer with 10, and Walter Ellis ’22 with seven.

The Bison move to 4-3 in the Patriot League. They will look to snag a win in Sojka on Saturday, Jan. 25 against Loyola.