The world is burning and it’s our fault 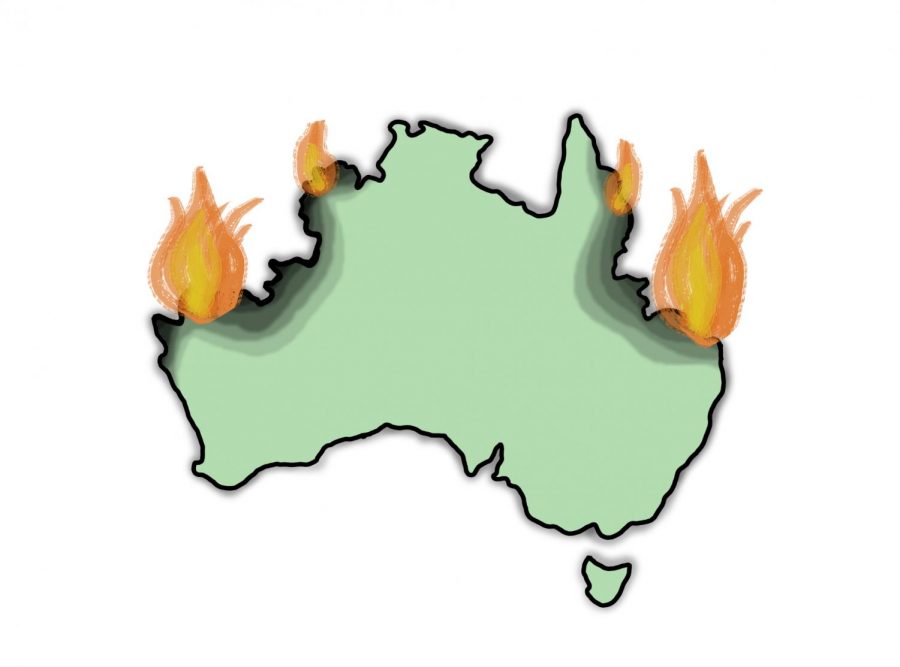 We have all seen, heard and watched – at least secondhand – the hellish fires that are ravaging Australian homes and invaluable Australian wildlife. Perhaps some of you are from Australia, know someone affected or have some first-hand experience that evoked raw pain, fear or despair to boil up within your blood. However, for many of us, we just simply did not feel afflicted. We were filled with apathy and, like with most world tragedies, we were waiting for the next big thing to feel bad about. However, before this disaster subsides and is dominated by the next news cycle, I urge you to consider the cause and effects of these fires.

The horrifying fact is that this is not the first time flames have destroyed a good chunk of our planet. While this fire is grabbing your attention right now — with an estimated $110 billion in economic losses and 1 billion animals impacted by the fires — I want you to consider how the Californian wildfires and fires affecting Delhi’s air pollution tie into the story.

The CNBC has claimed that over 95 percent of California’s fires in 2018 proceeding into last year were caused by humans. While the majority of these instances have been unintentional, both in Australia and California, individuals have been convicted for intentionally setting fires by lighting pieces of paper and throwing them out of moving cars during these area’s well-known dry seasons. Over 24 people in Australia alone have been convicted for intentionally starting fires, with many news outlets calling them “eco-terrorists.” CNN commented on these convictions, calling these arsonists “mentally-unwell” and asking the question, “How could someone commit such a heinous crime?” Other fires have been caused by throwing still-lit cigarettes and above-ground power grids causing electricity to arch and strike the ground.

An example of how these fires can be so devastating to our planet can be seen by taking a closer look at Delhi’s pollution problem. Delhi, being one of the most polluted cities in the world, faces dangerous levels of pollution numerous times a year. The city has cited smog as a major cause of car accidents, as drivers are inhibited by smog so thick that they cannot see where they are going, causing pile-ups to occur many times a year. Scientists have estimated that spending a day in Delhi’s toxic cloud is a rough equivalent to smoking 50 cigarettes (Kumar, Lung Care Foundation). However, Delhi’s air pollution spiked to hazardous levels in November. But why? In addition to growing industries in the city, Delhi is east of the Indian states Haryana and Punjab, India’s key regions for agriculture. Every year, after harvest seasons in India, farmers burn their crop fields as an easy and cost-effective way to clear their fields before the next harvest season. These massive smoke clouds are dragged to Delhi, bringing air quality levels 50 times over what is considered safe to breathe. In the case of Australia, as of last summer, Sydney was brought to 11 times the point of what is considered hazardous to breathe, as the Australian wildfires released 370 million tons of carbon dioxide. These fires can bring devastation to populous places where we live and can ruin our planet’s wildlife and air quality.

The important takeaway is that, while these fires may have been caused by humans, it does not mean that climate change isn’t real. Changing wind currents as the planet heats cause more severe thunderstorms and cause areas that were once fertile to become dry and arid. Climate change is simply making it easier for these fires to start, meaning that you need to be more careful with your actions than ever. These fires are causing planet Earth to be less and less habitable for our ecosystem every day that they keep burning; stay mindful and be aware of the effect you are having on this planet.