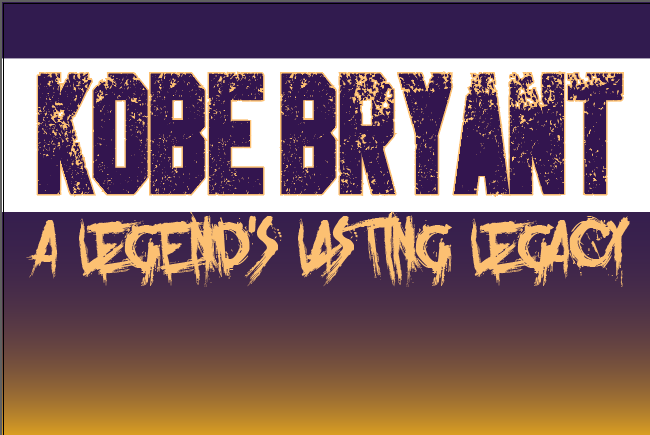 “And we both know, no matter what I do next

I’ll always be that kid

With the rolled up socks

Garbage can in the corner

:05 seconds on the clock

Ball in my hands.

The immortal words of L.A. Lakers legend Kobe Bryant from his retirement letter read like a bittersweet reminder of the player’s greatness at a time when the world is mourning his death. The passing of Bryant, alongside the deaths of his daughter, Gianna Bryant, and seven other passengers who were killed in a helicopter crash in Calabasas, Ca. on Jan. 26, serves as a reminder to reflect on Bryant, his career and the legacy he leaves behind.

Bryant’s passing sent shockwaves throughout the sports and culture industries, with outpourings of mourning posts from fellow athletes, celebrities and fans alike.

Among those in mourning was one of Bryant’s former teammates and a fellow Lakers legend; LeBron James expressed his sorrow over the loss of Bryant in public statement on social media.

“Man I love you big bro. My heart goes to Vanessa and the kids. I promise you I’ll continue your legacy man! You mean so much to us all here especially #LakerNation,” James said. “It’s my responsibility to put this… on my back and keep it going!!”

In a public letter written on “The Players’ Tribune,” Major Baseball League Hall of Famer Derek Jeter noted that “[t]ragedies like this have a cruel way of reminding us of what’s important in life: spending time with our loved ones, and being there for them no matter what.”

When asked about how Bryant has impacted him, Nathan Davis, the Head Coach of the University’s men’s basketball team, recalled that “on the court it would be his idea of always looking at what is next and how to improve. Off the court I would say it is the way he was with his children and how much effort he put into making sure he could be with them as much as possible.”

“I feel very sorry for the death of his daughter, Gianna,” Mauricio Ramirez ’20 said. “It’s almost painful when a young life passes away without being able to enjoy and live their life. That’s very painful, I bet.”

From winning All-Star championships, to receiving gold medals at the Olympic Games, to surpassing Chicago Bulls player Michael Jordan’s all-time record for points scored in the National Basketball Association (NBA), Bryant’s basketball career has been record-setting up until his retirement in 2016.

Bryant’s 20-season long career with the Los Angeles Lakers began in 1996 when he was drafted into the NBA straight out of high school. Throughout the early 2000s, Bryant helped lead the Lakers in repeat wins at the NBA championships. In 2008, Bryant was named the NBA’s Most Valuable Player and won his first gold medal at the Olympic Games in Beijing, China. In 2012, Bryant surpassed the 30,000 point threshold, just the fifth player in the NBA to accomplish this feat.

Stepping beyond the world of sports after his retirement, Bryant won the Academy Award for Best Animated Short in 2018 for “Dear Basketball,” a film that celebrates his love of basketball and his time in the NBA.

Bryant’s record-setting career can largely be attributed to his infamous work ethic, the “Mamba Mentality.” “Mamba Mentality is all about focusing on the process and trusting in the hard work when it matters most. It’s the ultimate mantra for the competitive spirit. It started just as a hashtag that came to me one day, and it’s grown into something athletes – and even non-athletes – embrace as a mindset,” Bryant said in an interview with The Amazon Book Review.

In the coming days and weeks following his death, Bryant’s legacy will be remembered by his interactions with others, his accomplishments – on and off the court – and his enduring commitment to the game.

Davis remembered Bryant’s significance to the game. “Kobe Bryant was one of the 10-20 best basketball players to ever walk the Earth,” Davis said. “He was a relentless competitor and pushed so many to be the best they could be. Off the court he was far from perfect, but certainly seemed to have learned and grown from his mistakes.  He seemed to be a wonderful father.”

By “mistakes,” Davis is alluding to a 2003 sexual assault case which Bryant settled out-of-court in the early days of his career. Following the settlement, both Bryant and his wife Vanessa appeared in a press conference to issue an apology:

When asked about their opinions on Bryant’s sexual assault history, University students expressed a variety of opinions.

“People are people, so we don’t really know the whole story. The media will do a lot of things to get ratings,”  Mauricio Ramirez ’20 said. “He’s going to be remembered as a person who cared about young athletes. Probably people are gonna forget the history of sexual assault because of that. We’ll see. We don’t really know.”

“I’ll say he’s addressed his problematic behavior in ways that others who’ve also done the things he has haven’t,” Mary Collier ’21 said. “I commend that and [his] learning and changing for sure. But I’m empathetic to victims when their abusers are people in power and [the abusers] pass away… they can’t escape from [media coverage].”

Whether Bryant will be most known for his sports career, his “mistakes” in the past or his ambitions after retiring from the NBA in 2016, his legacy as one of the greatest basketball players of all time will live on.