Athlete of the Week: Maddie Hartigan ’22, Women’s Swimming and Diving 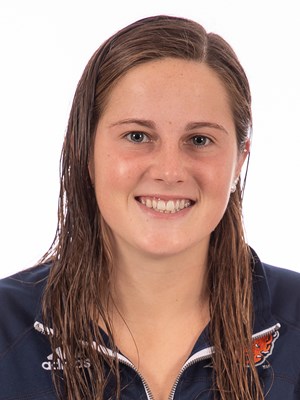 For the first time since 1998, the Bison women’s Swimming and Diving team reached double-digit victories in dual meet competition this season. Their 10-1 record extends an outstanding two-year stretch, going 18-2 in dual meets (13-2 in the Patriot League) over the past two seasons.

Maddie Hartigan ’22 has proved an integral piece to the team’s success. The sophomore freestyler hails from Pelham Manor, N.Y., where she was a 2016-17 USA Swimming Scholastic All-American during high school, though she fell in love with the sport at a much younger age.

“My first memorable moment was when I won the 50 breaststroke at a summer championship meet when I was 10 years old.  This was the turning point for me, where I fell in love with the sport,” Hartigan said.

Since then, Hartigan has grown her skills as a swimmer and chose to pursue a collegiate career at the University after being drawn to the “strong peer support system” that she witnessed among the close-knit Bison swimmers on her recruiting visit. Since joining the team, Hartigan has undoubtedly made her mark in her first two seasons with the Orange and Blue.

During her freshman season, Hartigan was named to the 2019 All-Patriot League First Team after amassing 15 individual victories. These included five first-place finishes in the 500 freestyle, four in the 200 freestyle and two in the 1,650 freestyle. Her time of 16:44.99 in the 1,650 freestyle race at the 2018-19 Patriot League Championships won her the gold in that event. She also took home second place at the League meet in the 500-yard freestyle at 4:49.16. Overall, Hartigan finished in the top three a remarkable 25 times during her inaugural campaign.

Hartigan’s success has continued into her current sophomore campaign. She was honored as the Patriot League Female Swimmer of the Week in December for her five-medal performance at the Bucknell Invitational, three of which were gold medals. During that meet, she clocked the program’s fastest time in the 500-yard freestyle (4:46.62) and the second-fastest times in the 1,000 free (10:03.91) and the 1,650 free (16:36.44). More recently, on Jan. 25, the Bison handed Patriot League contender Lehigh their first loss of the season behind ten individual victories, including one from Hartigan in the 200 freestyle. Notably, she also finished second behind teammate Abby Merriman ’20 in the 500 freestyle.

On Feb. 1 at the Navy Invite, Hartigan swapped her normal freestyle for the butterfly and captured wins in both the 100 yard and 200-yard races. Her 200 time of 2:04.49 was good for eighth-best in program history. She also competed in the 200 freestyle relay and the 200 medley, taking home first in both races. The Navy Invite was unscored.

Hartigan credits her motivation to her family, coaches, and teammates. She recognizes that her team is working toward a common goal, which she believes has fueled their success to date this season.

“We know what we can accomplish, and we work together to get it done. A meet isn’t won by the success of just a couple of people. Everyone contributes and every race is important. The energy on the pool deck at meets and at practices is very motivating and the key to good performances,” Hartigan said.

The Bison next compete in the Patriot League Championships on Feb. 19–22. Defending champion Navy will host the meet in Annapolis, Md.

“We work all season training and preparing for this one four-day championship meet… I hope that I come away with some personal best times and score as many points as I can for our team,” Hartigan said.

Two-time Patriot League individual medalist, capturing gold in the 1,650 freestyle and silver in the 500 freestyle in 2019