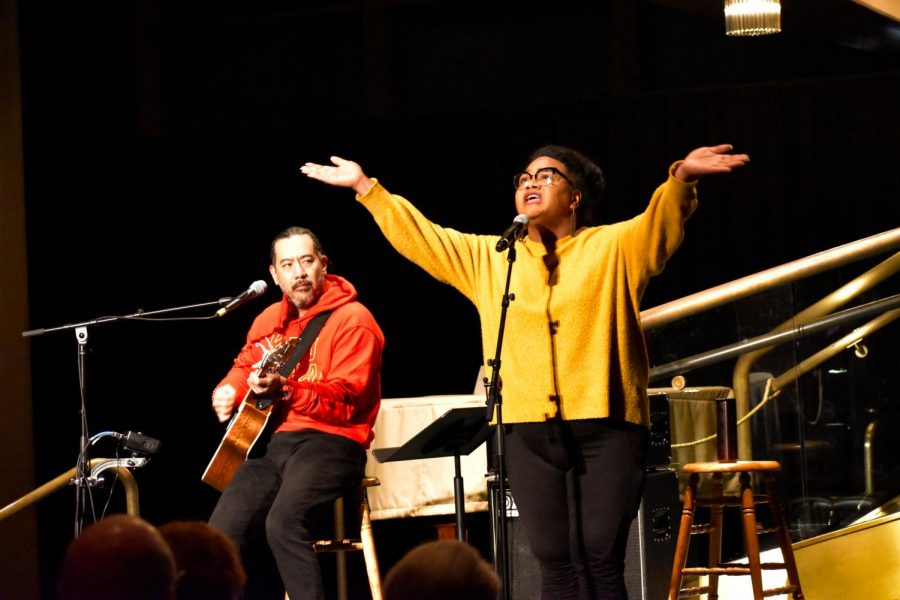 On Friday, Jan. 31, singer and dancer Kaumakaiwa Kanaka’ole performed a series of original pieces at the Weis Center for the Performing Arts. Kanaka’ole’s work draws inspiration from Hawaiian hula practice and ancestral chants to create a fascinating contemporary blend. The Hawaiian artist was accompanied by renowned musician and producer Shawn Pimental on the guitar and backup vocals. The performance was free of charge for students, staff and community members.

With three solo CDs and five Nā Hōkū Hanohano Awards (Hawaii’s most prestigious music award), Kanaka’ole explores and gives her own perspective on the meaning of traditional Hawaiian indigenous thought, through a combination of hula (ritual dance), leo (vocalization) and mele (poetry text). Her inspiration comes, in part, from her family roots; Kaumakaiwa, a transgender woman (mahu wahine), is the great-granddaughter of Edith Kanaka’ole, one of the most influential figures of the Hawaiian “Renaissance” of the 1960s and 70s. Kanaka’ole’s performances follow the same mission statement as her great grandmother: preserving the deep-rooted traditions of Hawaiian culture.

During her performance, Kanaka’ole intertwined traditional chants with acoustic performances to connect the audience with their spiritual side. Her performance focused on her connection to her land and heritage as she sang for her love of Hawaii and its society.

“As a dancer and choreographer, I really enjoyed being able to see a form of dance that is completely different than what I normally perform. Her music was peaceful yet incredibly moving at the same time,” Erin Jengo-Quirk ’22 said.

Every one of Kanaka’ole’s performances begins with the same song, “Mele Ha’i Kupana,” to pay homage to her great-grandmother and great-great-grandmother. The title of the song translates to “to speak the name of your ancestors,” allowing Kanaka’ole to begin every show by bringing both herself and her audience closer to her own heritage.

Kanaka’ole addressed the history and legacy of Hawaii, along with modern issues during her performance. Between chants and songs, she tells stories and jokes to give the audience background on her life and to give more context to her songs. Her performance not only provided people with entertainment, but also education about Hawaii’s people, ecology, and traditions.

“Kanaka’ole was an extremely entertaining performer. Not only was she talented, but she taught the audience so much about the Hawaiian culture. I feel as though I left the performance with so much more knowledge about Hawaii and more appreciation for their unique art forms like hula,” Erin Jengo-Quirk ’22 said.

Upcoming events at the Weis Center for the Performing Arts include the Tamburitzans on Feb. 7, the National Symphony of Ukraine on Feb. 9, Okaidja Afroso on Feb. 13 and Eric Ian Farmer Trio on Feb. 17.