The ‘Nell Party performs in Trout 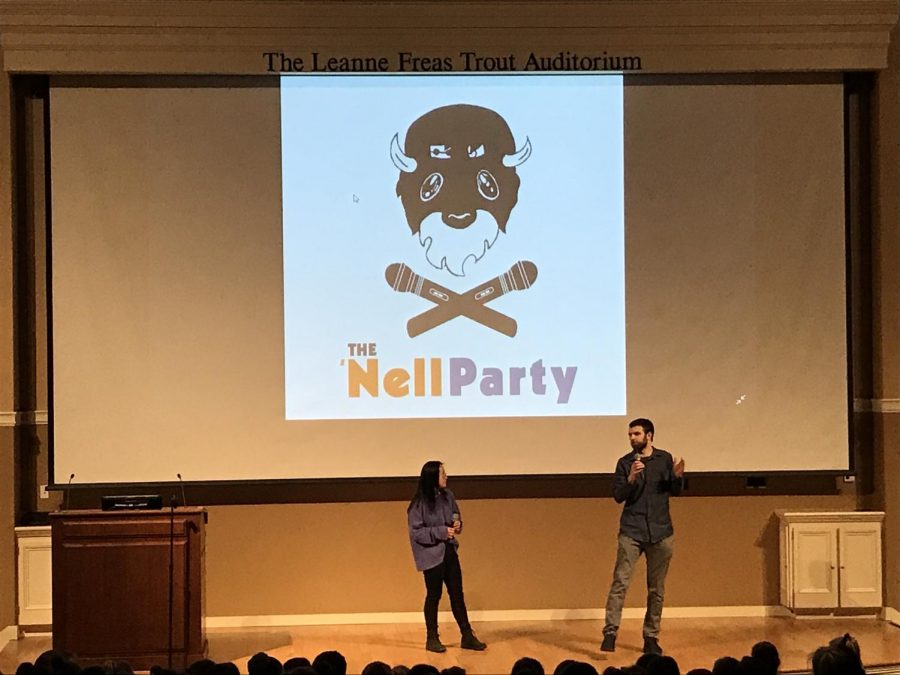 The University’s stand-up comedy club, The ’Nell Party, performed in Trout Auditorium on Jan. 31 at 7 p.m. Franz Schauer ’20, one of the performers, says the club meets on Sundays to workshop ideas – especially before performances – and construct each show’s set. The club performs every Thursday night at Civil War Cider for its open mic night; however, their full show is a once-a-semester occurrence that brings together a full auditorium of all majors — most of whom are there to support a friend who is performing.

The show’s two hosts opened with back and forth jokes before introducing the first performer: Abby “Baby Red” Neff ’22. For her introduction, David Gillett ’20 read Neff’s lacrosse bio, which claims she is 5’3 and can squat 300 pounds. He then went on to say, “She also says she won the school spirit award in high school, so apparently she’s like the life of the party or something.” This proved to be true. Even before Abby began her set, the crowd was wildly cheering for her; clearly, the University community had shown up.

The next performer was Kyle Cohick ’20, a theater major from Allentown, Pa., who was introduced as “Mackenzie Gross’s two-year-old boyfriend.” He opened by sharing “dumb thoughts.” Cohick generated a largely positive response from the crowd, with much of his set being composed of sex jokes. To add the humor, Cohick pointed out his parents within the crowd. He ended with a “wholesome” joke.

When Isabel Seaborn ’20 was introduced for her set, the room was in good spirits. Isabel said it was her first time performing stand-up comedy, and she used dark, edgy humor in her set. Her walkout song was “Silent Night.” Her opening line was “I’m more than KDR’s sweetheart,” which won the crowd over.

After closing the show, Schauer regarded standup as a passion of his, saying, “I don’t see this as being a part of my life that’s just like going to fall off once I leave college.” Of the University comedy experience, he says, “The end of my sophomore year I finally wrote something, and after I wrote something, I loved the feeling of getting up here and telling jokes, and I’ve done like one big show every semester since…. and it’s honestly been one of the most memorable things I’ve ever done at Bucknell.” Schauer says he comes up with his jokes by first tweeting something simple out that develops into a full joke from there. When asked what he wants the people to know about him, he – referring to a previous joke of his – said, “I don’t really have chlamydia.”

Schauer says that most people bomb their first time doing standup. That is the case for Shishir Budha ’20, who performed with The ’Nell Party last semester. This semester, Budha taped the entire show. In his interview, Schauer credits Budha with having the most growth he’s ever seen at the University. When asked how he got into comedy, Budha said, “I started doing standup as a sophomore at Bucknell in 2018. But back when I was in high school in Nepal, I always listened to George Carlin and Eddie Murphy, but I could never imagine to even try what they had done so perfectly. I finally did my first show at Bucknell where I bombed terribly… I remember getting laughs but deep inside I knew that I really messed up. But that was my entry point and it got better as I kept doing it.”

Budha says that the University’s comedy scene is very vibrant and that The ’Nell Party and improv group “We Brake for Nobody” have free events that are open to everyone throughout the year. When asked about continuing with comedy after graduation, Budha said he plans on taking a gap year to live in New York. “My goal is to have a day job and do stand up during the night time mostly in the lower Manhattan area…. Stand-up comedy is one of the most democratic arts if you wanna call it ‘arts,’ because if you keep making people laugh and you don’t quit, you are always promised to get your break… But the first few years of trying to make a living with comedy is really terrible, financially and emotionally.”

Budha has already had his “break,” so to speak. He travels for comedy events during the weekends, breaks, and summer for a string of gigs that started after his summer 2019 performance at Gotham City. “I got a six-minute tape of my set, which got me numerous gigs in New York and a few comedy festivals in North Carolina and Pittsburgh. Also for some reason, the video got picked up by the Nepalese audience and got viral in Nepal (with 250k views on Facebook) and I started getting booked for Nepali music concerts in NYC where I would open for musicians,” Budha said.