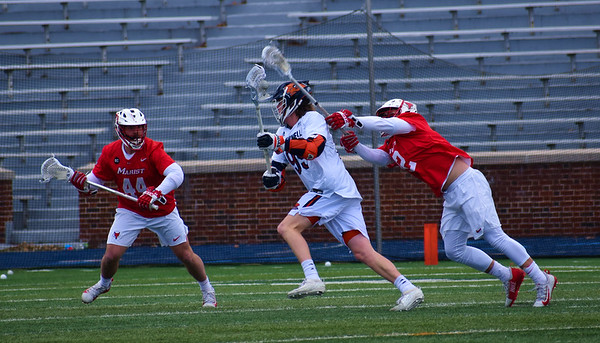 The Bison men’s lacrosse team faced the Marist Red Foxes this past Saturday, Feb. 29. The Orange and Blue secured a 20-11 victory.

Bison attacker Will Yorke ’20 led the team with a school-record of nine goals and tied the record for total points with 11. Yorke’s nine-goal performance is also tied with the Patriot League record for goals in a single game, previously set by Navy attacker Dave Little in 2017. Yorke scored his record-breaking goal with 5:21 left in the game, and now has notched 25 goals this season. Yorke also added two ground balls and two caused turnovers to top off his performance.

Faceoff specialist Nick Crovatto ’22 went 13 for 30 in the faceoff, in addition to tying the team-high of five collected ground balls.

The Orange and Blue netted six goals in a row at the end of the second quarter, giving them a 12-3 lead heading into halftime. The Red Foxes bounced back scoring four consecutive goals at the outset of the second half, but the Bison responded with four unanswered goals of their own. This gave the Orange and Blue a 10-goal lead, from which the Red Foxes were unable to recover.

The Bison’s 20-goal performance is the highest this season, topping their previous 16 against both Furman and Binghamton. Attackers Tommy Sopko ’21 and Brett Hobbs ’22 posted goals for the Orange and Blue, as well as midfielders Nick Clarke ’21, Harry Wellford ’23 and Grayson Burns ’20.

The Bison are now 5-1 on the season. The Orange and Blue open up Patriot League play on Saturday, March 7 at 1 p.m. at Boston University.