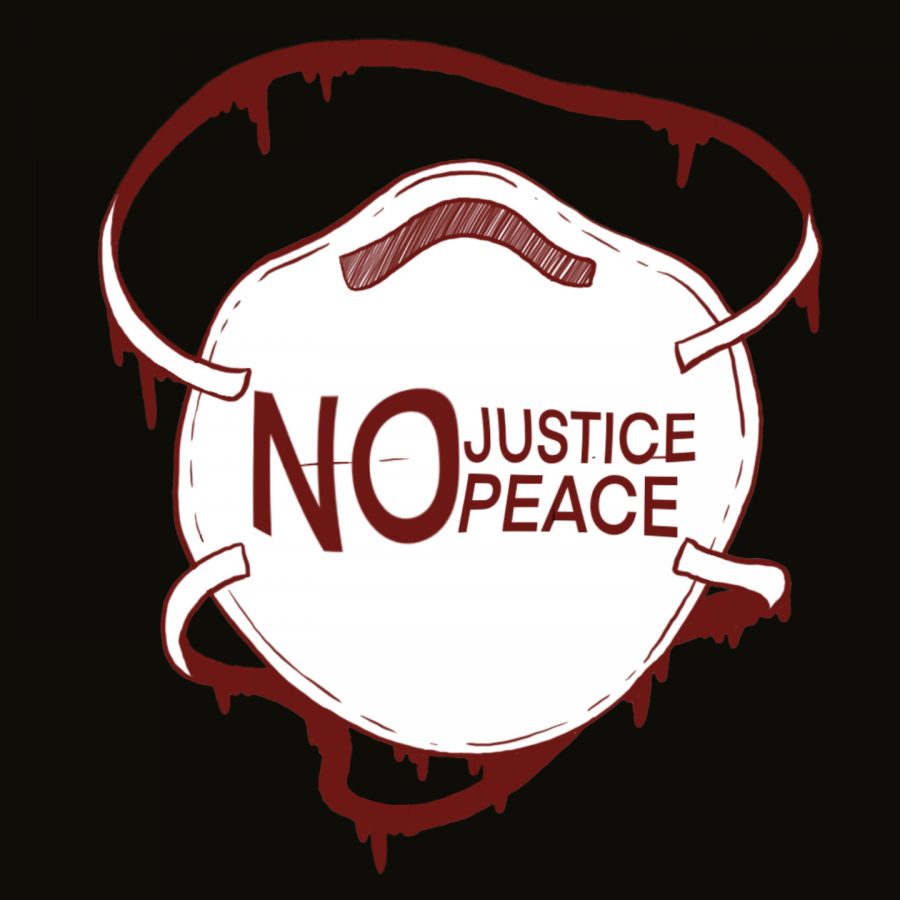 Trayvon Martin. Breonna Taylor. George Floyd. These are but a few of the countless Black lives lost to the senseless violence that is repeatedly enacted upon the Black community. In solidarity with the Black Lives Matter movement and those protesting, The Bucknellian refuses to stand by while anti-Blackness runs rampant through the University and country.

In the past two weeks, protests have erupted in cities and towns around the country following the grotesque murder of George Floyd at the hands of law enforcement — and the anger is different this time. The horrific killing of Floyd by Minneapolis Police Officer Derek Chauvin, the COVID-19 pandemic casting stark contrasts to already-extant racial and economic inequities, and the angry, racialized politics of Donald Trump have all precipitated nationwide action with a clear demand: to eradicate the systemic violence against Black and Brown individuals. While centuries of pre-existing mechanisms have laid the foundation for the United States’ current racist and inequitable structure, the past decade or so has substantially accelerated both the effects and our awareness of such systems.

Many have been quick to condemn the nature of these demonstrations, citing violence, property damage and looting as counterproductive to a successful movement. However, we must realize that many of these peaceful protests are escalating only after law enforcement begins firing tear gas, rubber bullets and flash bombs into crowds, running over protestors with patrol cars, and taking advantage of city-imposed curfews to pummel anyone in sight — whether they be rioters, peaceful protestors or DoorDash employees. Those protesting destructively are not only directly reacting to state violence, but are also operating as an essential last resort for a people unheard (and actively abused by) the state. Whether it be Nat Turner’s slave rebellion, Stonewall or the 1992 Los Angeles uprising, rioting on behalf of marginalized communities is an inevitable result of a country that consistently rejects attempts for peaceful protest and crushes dissent by main force. This should not be misinterpreted as an appeal for the destruction of property; however, one can hardly criticize the “violence” of protestors while simultaneously overlooking the political, social and legal conditions that have necessitated their response. From slavery, to redlining, to the War on Drugs, the United States has put Black people into a continuous state of exception, allowing one of many pretexts to provide justification for their extrajudicial murder. To view the protection of property as valid grounds for violence against protestors is to create yet another pretext, and to allow the true violence to continue.

Notwithstanding these arguments, it is still worth examining the legitimacy of protestors’ outrage over the killing of George Floyd, and by extent the epidemic of such aforementioned state-sanctioned violence. Police brutality against Black Americans is all too common, with law enforcement officers consistently utilizing their authority to terrorize Black communities, thus protecting the edifice of white supremacy upon which this country was founded. According to a recent article from The New York Times, despite Minneapolis’s population being only 20% Black, almost 60% of recorded instances of police officers using force are against the city’s Black citizens. As a result, the Minneapolis Police Department (MPD) — the same department responsible for the death of George Floyd — uses force against their Black population at a rate seven times more than against their white residents. While many have been quick to blame such figures on corruption within the MPD, these patterns iterate across almost every police station in every major city in America. According to CNBC, 24% of victims of the approximately 1,000 police killings in 2019 were Black Americans — despite them only comprising 13% of the country’s population. The past two weeks of civil unrest have been equally damning for law enforcement, with local and regional police repeatedly brutalizing those peacefully protesting against white supremacy and police violence. Tear gas, rubber bullets, pepper spray and flash-bang grenades have become a staple of post-curfew “crowd control”; some have lost eyes from these weapons, and others have died from respiratory problems or bullet wounds. Far from suppressing the voice and impact of these protests, such instances have only cemented the police’s position as, essentially, a domestic terror organization. We do not wish to neglect the role of those “good” officers who seek to reform the system from inside its insidious and racist mechanism; however, these officers are unfortunately a minority largely incapable of effecting the necessary change. They operate within an incorrigible and inherently anti-Black organization, and they would do better to simply resign.

Still it is also imperative that we understand police violence as a mere symptom of the overarching systemic racism and anti-Blackness that is embedded within our societal consciousness, and every major U.S. institution with it. Mass incarceration, the War on Drugs, the continued hyper-sexualization of Blackness, the mistreatment of Black transgender individuals and the school-to-prison pipeline are all the result of a country built by slave labor on stolen land with laws purposely designed to permanently maintain a class system that benefits property-holding white males.

The Bucknellian stands with those protesting against any and all forms of oppression, and recognizes that it is our campus community’s duty to fight against these injustices. However, our commitment cannot come in the form of lukewarm statements that barely acknowledge or mention anti-Black racism, nor can it consist of temporary activism that ends after protests are no longer dominating the news cycle. Instead, we must educate ourselves on our own implicit racial biases while continuously standing up against racism and anti-Blackness on- and off-campus — even in our everyday lives. Whether it be calling out our friends and peers who make racially insensitive remarks or correcting and educating our prejudiced family members, our solidarity must be accompanied by concrete actions. We as a campus cannot stand idly by and remain silent in times of injustice. To refuse to take leadership amid such chaos — or to simply hide behind the bland platitudes of “ending hate” or “doing better” — would transgress the fundamental mission of an educational institution. The basic selling point of a liberal arts college is to encourage critical thinking and to “promote justice in ways sensitive to the moral and ethical dimensions of life.” This means outlining the specific problem — anti-Blackness — and the solution — dismantling the institutions which preserve the socioeconomic and disparate status quo — while refusing to euphemize, equivocate or scapegoat one’s own complicity in such injustice. That is the collective investment that the community requires.

As members of a primarily white university, it is our responsibility to also resist anti-Blackness on a deeper, cultural level. Our words are rendered meaningless when they still cannot prevent Black men and women from being shot and killed in their own communities on a daily basis, or when systems and processes that were built to oppress Black citizens — such as the prison-industrial complex, the underfunding of education, and a lack of opportunity and mobility — continue to exist. Accordingly, we must demand significant changes from the institutions of which we are a part — and from those of which we are not. This can mean advocating for things such as the defunding of our local police departments in order to allocate more funds to mental health services, education, employment opportunities and affordable housing. It may also mean engaging in uncomfortable conversations about race with those around us, which will go well beyond condemnation of our racist past, to engaging with our racist present.

While The Bucknellian does not presume to speak for anyone beyond its own editorial staff, we would like to offer some materials that will hopefully aid in starting a necessary dialogue. Below is a set of itemized lists of books, television shows and podcasts that provide a more nuanced and substantive look at the modality of race in the modern day. Also appended are a number of choice organizations, including news networks and bail funds that have provided support to those protesting all over the country. Our solidarity is with every protestor, writer, newscaster, organizer and donor dismantling the anti-Black regime today, tomorrow, next week, next month and for all time.

“The Hate U Give” — Angie Thomas

“Between the World and Me” — Ta-Nehisi Coates

“Why are all the black kids sitting together in the cafeteria?”— Beverly Tatum

“The Common Wind: Afro-American Currents in the Age of the Haitian Revolution” — Julius S. Scott

“Toward Freedom: The Case Against Race Reductionism” — Touré F. Reed

“The Color of Law: A Forgotten History of How Our Government Segregated America” — Richard Rothstein

“The Fire Next Time” — James Baldwin

“The Wretched of the Earth” — Frantz Fanon

“When They See Us”— Stream on Netflix

“If Beale Street Could Talk” — Stream on Hulu

“Do The Right Thing”

“Whose Streets?” —Stream on Hulu, Amazon Prime and YouTube

“Lynching in America: Confronting the Legacy of Racial Terror” — EJI

Organizations to donate to

Or visit ActBlue to split a donation between a number of bail funds across many major cities.